When Hawaii Five-0 resumes Season 7 this Friday (CBS, 9/8c), viewers will learn precisely what grisly fate the vengeful cartel has in store for Chin Ho Kelly, who made the ultimate sacrifice in the midseason finale, trading his well-being for that of niece Sara.

“The fact that he was willing to lay down his own life for this girl says everything — and it’s not a rash decision he made,” notes Daniel Dae Kim, who was named TVLine Performer of the Week for the soul-crushing episode. “He decided in a cool, calculated way that his life is worth the well-being of this child.

But perhaps all is not lost for Chin. Couldn’t the Diego cartel find a use for him — perhaps exploit his resources as a lawman — instead of simply killing him? “I doubt it!” his portrayer answers with a laugh. “So it really will be a matter of how the team works together to get him back home. We’re going to see Five-0 get involved, as we always do when it comes to the welfare of one another.”

Whether McGarrett, Danny et al can extract him from this seemingly airtight situation will be settled, one way or the other, by the end of Friday’s hour (as if production stills for the following episode didn’t already tip the show’s hand). “It is Five-0 at the end of the day, so this story will get wrapped up, because we need to go on with the show,” Kim acknowledges. “There is a resolution.” 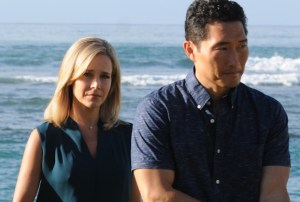 these days about Chin Ho’s life-or-death predicaments (which happen on the regular for the Five-0 team members!) is that he now has a lady love, SFPD Detective Abby Dunn (played by Julie Benz), invested in his survival. So, maybe he owes her, like, a phone call if he makes it out of this alive?

“You would think! But yes, it’s nice to be reminded that he’s got somebody pretty great waiting for him,” Kim concurs. “That’s been one of the really nice things about this past season or so. Julie Benz has brought a really great dynamic to the show, and I really enjoy my scenes with her.”

Thing is, Benz has a recurring role on the new CBS drama Training Day, premiering Thursday, Feb. 2 at 10/9c. As such, Abby resurfacing to help soothe her beau’s wounds “is a matter of trying to work out the schedules,” Kim says, “but I do know there is a very strong appetite to bring her back, on everyone’s part.”