A sexy, gritty reboot of The Wizard of Oz. It sounds like something Jack Donaghy would dream up on 30 Rock, doesn’t it? Yet Emerald City isn’t a 10-second sitcom joke; it’s a 10-hour actual thing that NBC has created. And while it displays some dazzling visual flair and is plenty ambitious in its scope, like a certain famous Scarecrow, this ponderous revamp doesn’t seem to have much of a brain at all.

Debuting Friday, Jan. 6 at 9/8c, Emerald City begins, appropriately enough, in Kansas, with a grown-up Dorothy Gale (True Detective‘s Adria Arjona) searching for the truth about her birth mother. But we don’t have to wait long before a tornado sweeps Dorothy away to a magical land of witches, wizards, giant statues and decadent palaces. Looking for a way back home, she befriends a handsome swordsman she names Lucas (Dracula‘s Oliver Jackson-Cohen) and seeks the counsel of the all-powerful Wizard (Daredevil‘s Vincent D’Onofrio).

While the classic Wizard of Oz tale is certainly rich enough to support a modern retelling (Syfy did just that in 2007 with Tin Man, starring Zooey Deschanel), the scripts for Emerald City seem to be marking off boxes on a “gritty reboot” checklist. Dorothy is a jaded nurse with severe mommy issues. Her Scarecrow equivalent, Lucas, is a brooding hunk who admits to killing people. The Munchkins are feral, Wildling-like tribal warriors. The Wizard would rather murder Dorothy than help her leave. It’s all very grim and humorless — shouldn’t The Wizard of Oz be at least a little fun? — and, in case you were wondering, not at all appropriate for children. 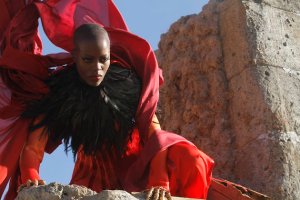 That said, Emerald City is definitely a feast for the eyes, with dreamlike landscapes and beautifully elaborate costumes, like the fluttering cape of red ribbons worn by the Wicked Witch of the East (Florence Kasumba). All 10 episodes are directed by Tarsem Singh, the visionary behind J.Lo’s 2000 thriller The Cell and R.E.M.’s iconic “Losing My Religion” video. So while Emerald City has all the emotional depth of a music video, at least there are pretty things to look at along the way.

Since it has 10 hours to fill, Emerald City pads the original Oz story with side characters from other L. Frank Baum Oz books like the young boy Tip (Jordan Loughran). But with too many plotlines to tend to, the narrative ends up feeling sluggish, dragging its feet on the way to the titular city. The Dorothy/Lucas coupling is meant to set off sparks a la Once Upon a Time‘s Emma/Hook, but their romance is more dutiful than convincing. And intriguing characters like the Wicked Witch of the West — here, a sultry opium addict played by Ana Ularu — are left frustratingly undeveloped.

Given how muddled the final product is, it’s not surprising that Emerald City has been in development for more than three years, and has been through multiple showrunners already. (You can almost hear the NBC executives standing off-camera shouting, “More Game of Thrones-y!”) But it’s still a disappointment to see a beloved fairy tale wasted like this.