New year, new Sherlock: Our favorite pompously rude detective is back to kick off Season 4 with a ripping good mystery. Sunday’s premiere, “The Six Thatchers,” not only delivers lots of action and laughs (mostly at Sherlock’s expense)… but a truly shocking twist for one of the show’s main characters.

First things first: We need to clean up that whole mess of Sherlock killing Charles Augustus Magnussen in cold blood in “His Last Vow.” Mycroft informs his government cronies that Sherlock’s role in Magnussen’s death will never leave the room, and reveals doctored surveillance footage that exonerates his brother. So Sherlock is officially “off the hook”… but the authorities do want to know why he’s still expecting more tricks from a dead Moriarty. He tells them he plans to wait for Moriarty to make the next move: “I’m the target. Targets wait.”

To keep himself busy while he waits, Sherlock tells John and a pregnant Mary that he’ll go back to solving a string of crimes like everything’s normal. And in a fun montage, we see him rattling off solutions to awed clients, barely burning a brain cell in the process. (“It’s never twins,” he drolly informs John during one investigation.) 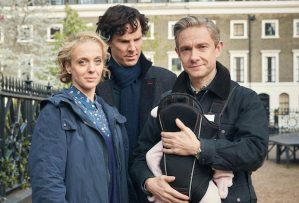 But they drop their cases when Mary goes into labor, and John rushes to drive her to the hospital. (Please, someone get us a GIF of a pain-crazed Mary shoving Sherlock’s face into the car window.) It’s a baby girl — Rosamund Mary, she’s named — and John asks Sherlock to be a godfather. Sherlock dismisses the very idea of it all (“God is a ludicrous fiction…”), but he relents when John informs him “there’ll be cake.” Later, we see Sherlock trying to make a logical argument to Baby Rosie and failing miserably, so he’s exactly how you think he’d be with kids.

Then the real case arrives: At Cabinet minister David Wellsbury’s 50th birthday party, he gets a Skype call from his young son Charlie in Tibet. But a week later, when a drunk driver smashes into a parked car in David’s driveway, the car explodes… and Charlie’s body is found in it. In fact, the body had been dead for a week, John declares. “Oh, this is a good one!” Sherlock exclaims. “Is it my birthday?”

Sherlock meets with the grieving parents — but feels “a pricking in [his] thumbs” when he notices a table of Margaret Thatcher memorabilia nearby. He senses a plaster bust of Thatcher is missing (it was smashed by burglars, David’s wife says) and then spins an explanation of Charlie’s death: He was hiding inside that car to surprise his father on his birthday, then had a seizure and wasn’t found until the car burnt up. Makes sense… but we’re only 20 minutes into the episode; this can’t be the real answer, right? 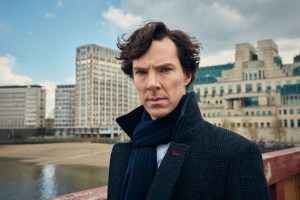 Sherlock’s not satisfied, either, and keeps having visions of Moriarty. The plot thickens when Lestrade finds another smashed Thatcher bust — this one, with blood on it. Conferring with a hacker friend, Sherlock learns that only six of the Thatcher busts were made, and makes a beeline to find the only one still intact. He gets there just in time, as a masked burglar is ready to snatch the bust. A fistfight ensues… before Sherlock uses the Thatcher bust to smack the burglar in the face. He assumes the burglar works for Moriarty, but the burglar doesn’t know who Moriarty is, defiantly asking Sherlock: “You think you understand? You understand nothing.”

And that might be an understatement: Sherlock finds a memory stick with the initials A.G.R.A. on it hidden inside the bust. It matches a memory stick that held all of Mary’s secrets that John destroyed. Wait… Mary’s involved in this? The burglar knows who she is and tells Sherlock to “tell her she’s a dead woman walking” before escaping into the night.

Sherlock’s mind is reeling (like ours is) and he confronts Mary, showing her the memory stick. She explains she was part of an elite team of mercenary agents, along with the burglar (named A.J.), carrying out missions for whoever paid the most. The memory sticks contained all their personal information, and served as insurance so that no member could rat the rest out; A.J. hid his in the Thatcher bust before he was captured.

Mary’s stunned to know A.J. is alive — and even more stunned to hear he wants her dead. Sherlock offers to protect her as part of his godfather vows, but she doses him with sleeping powder and runs off. After writing John a, um, Dear John letter, Mary adopts a series of disguises and aliases, ending up in Morocco… but Sherlock beats her there. “How did you find me?” she asks. “I’m Sherlock Holmes,” he shrugs. That, and he stuck a tracer on the memory stick. John’s there, too, and isn’t happy that she lied to him. But before they can get her back to London, shots ring out. It’s A.J. He explains he was tortured after Mary escaped, and he always blamed “the English woman.” But cops shoot A.J. before he can explain.

Turns out “the English woman” isn’t Mary, but Mrs. Norberry, the doddering secretary we saw in the opening scene with Mycroft and the government cronies. Sherlock tracks her down to the London Aquarium, and she explains how she got rich selling government secrets, using A.G.R.A. as her personal hit squad. The cops arrive to take her away, but first, she fires her gun at Sherlock… and Mary dives in front and takes the bullet!

John tries to save his wife’s life, but Mary says, “I think this is it… you made me so happy.” After apologizing to Sherlock for shooting him that one time, Mary tenderly tells John: “Being Mary Watson was the only life worth living.” And with that, she dies. John unleashes a primal wail of grief and then lashes out at Sherlock: “You made a vow!” (And if you’re not tearing up by now, you’re made of stronger stuff than we are.)

In the aftermath, we see Mrs. Norberry being led away by the cops, John solemnly walking through a graveyard, and Sherlock seeing a therapist (!). After sharing a nice moment with Mrs. Hudson, though, he receives a CD in the mail, with the words “Miss Me?” written on it. (Uh-oh.) But it’s not from Moriarty; it’s from Mary. In a pre-recorded video to be played after her death, she gives him one last case to solve: “Save John Watson.” Which will be tough, since John refuses to see him. Sigh.

What did you think of the Sherlock Season 4 premiere, and the big Mary twist? Give us your take in the comments.