TV returns from the holiday break in earnest this week, with CBS’ Bull among the dozens of broadcast shows resuming their runs.

The Michael Weatherly-fronted freshman (airing Tuesdays at 9/8c) earned a full-season pick-up after just three outings, and to date stands as CBS’ No. 2 drama (in both the demo and in total audience, trailing only lead-in NCIS). Among all of the fall’s new dramas, it is far and away the most watched (averaging 12.7 million weekly viewers), while placing third in the demo.

TVLine invited Weatherly to hand down his ruling on Bull‘s performance thus far, share the TAC team’s “secret” backstories, re-reflect on his much-ballyhooed NCIS exit and give props to the former castmate who helped him find “happily ever after.”

TVLINE | Nine or so episodes in, how is Dr. Jason Bull different from the guy you met when you first read the pilot script?
The big pieces that I brought in when we were shooting the pilot were [Federico] Fellini’s 8 1/2, [a film about] a guy who is supposed to be in control, the director, the idea man. I loved the concept that Bull has this calm, cool exterior, with the glasses and the sweater and the hairdo, but underneath it is a lava flow. In the pilot, it was important to have Bull connect with that young kid and get emotional, and then at the very end where the woman [juror] sticks it to him with the crazy s–t she says. Those little apertures gave some insight. And then in doing the series, it’s more about finding out that Bull can be fun, he can be incredibly self-destructive, he’s contrarian sometimes. For me, the mechanism for the whole series is that Bull needs to find the answer to a question he hasn’t figured out yet. It’s not just that he’s good at reading people; he needs to read people. He has enlisted these very talented people to help him, but at the end of the day they all go home and have normal existences, while he’s a much more obsessive character. And that’s interesting to me. 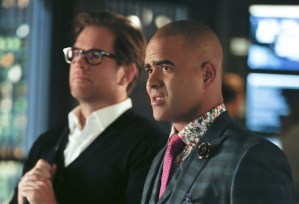 TVLINE | Speaking of those talented people, what are some of your favorite team dynamics to play?
I’ve come up with all kinds of backstories that don’t exist in anybody else’s mind. Chunk (played by Christopher Jackson), for instance, is Bull’s wingman, I think. I think he met Chunk during Fashion Week, when he was trying to meet some models. [Laughs] And Chunk just said, “You’re too old for this, man! What are you doing? And by the way, that girl you’re talking to over there is out of her mind.” I think he met Chunk in a fun way, and then said, “Wait a minute, this is a fascinating component of my team.” 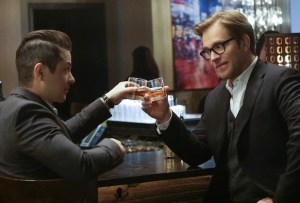 we saw in the last episode where Bull’s ex-wife/Benny’s sister comes back that in a way Bull holds onto Benny as a part of the marriage that he lost. Whether or not that’s healthy…. I don’t think Bull is healthy by any stretch of the imagination. I love it when people say, “Do you think it’s ethical for him to look into the jurors’ backgrounds?” And I’m like, “I don’t know, do you think its ethical that Jack Bauer ran around and did all the things he did?” He’s a TV character. It is interesting how people get their feathers ruffled about certain aspects of the show that I don’t worry about, really. 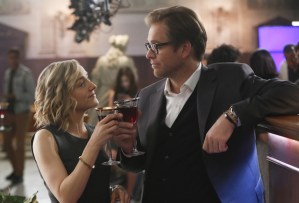 our justice system is perfect, untainted.
Right, even though they don’t register to vote, just so they don’t have to do jury duty! [Laughs] Geneva Carr’s character, Marissa, we have this platonic love for each other, a friendship and an honesty, but I think that her damage is something that’s going to be very interesting to unfold. I think that she’s had a lot of pain, and that is how they met. She’s known him the longest and in a way is the least surprised by some of his behaviors. She’s very earnest and analytical, and Geneva herself is such a marvelous lady.

Annabelle Attanasio and I had a really funny time talking about what the real relationship between Bull and Cable is. Very early on she winked at me and said, “I think I’m your daughter,” and it was like,”Oh God, wouldn’t that be weird, if nobody knew that?” So, that’s a fun dynamic — Annabelle is so young and energetic and optimistic, and that’s a wonderful thing to have on the floor. 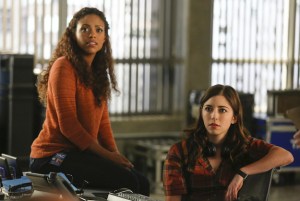 Jaime Kirchner’s character, Danny, much, but the episode that Jesse Stern wrote and we just finished offers a really interesting look at the kind of undercover work that she did. It’s very controversial, and it shows you her real toughness, but also that emotional disconnect that she has.

Each one of the characters is fractured and wounded in their own way. Everyone has a struggle, and this is a show about why people do what they do. Understanding each of these characters through that prism is going to be the important thing as the season comes to its conclusion. When we get to that last episode, we have to understand the whole picture of TAC and the Bull-verse.

TVLINE | This next episode (airing Jan. 3) is about self-driving cars. What is Michael Weatherly’s personal POV on the whole thing?
I’m just going to come out and say that I’m in favor of self-driving cars. We don’t all have an airplane to fly around in; that would be utter f–king chaos. And everyone doesn’t have their own train track. We have this feeling that we all get to have a car, because that’s some “inalienable right” as human beings, but I don’t think it’s a right. I think that it’s a mode of transportation that’s 100 years old, and it’s somewhere between a small apartment and a horse-and-carriage, but a horse couldn’t go 110 miles-an-hour. As a parent of three kids, I really would prefer that everyone was in a very safe car that was limited by design  and was shaped like a marshmallow. [Laughs]

TVLINE | It’s like I have said to my own sons, “There will never be flying cars like on The Jetsons, simply because it would be mayhem in the sky.” There are no lane dividers up there, it’s never going to happen.
And look at what drones are doing…. I know that people feel that it’s some sort of Second Amendment thing, that their freedom is tied to being able to “get out on the open highway and drive my car wherever I want.” Well you know what? That’s what your legs are for. You can walk anywhere you want.

TVLINE | How has filming Bull here in New York City been working out for you? Your wife, Bojana, is a doctor back in L.A. at Cedars-Sinai, right?
Yes, she is working in L.A. right now. We go back and forth a lot. The kids will come here for a couple of weeks, and then I’ll go back there as many weekends as I can. We do a lot of FaceTime every day….

TVLINE | So it is going as well as you had hoped?
Yes. And the success of the show is really the key. People are always asking me [about its future], and I’m like, “Well, look, I know it’s not a disaster.” [Laughs] Some people think, “It’s still on?” while others are like, “It’s doing so great!” There’s a lot of very subjective stuff around television these days. The key is, “Is the show any good?” Is it holding water and making sense? And when you think of it as a viewer, do you understand what the promise of the show is? And are we delivering? We’re still building the recipe. 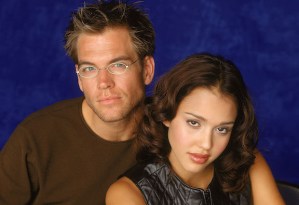 My experience on Dark Angel was that we built a show that was a dystopian drama airing Tuesday night at 9, and then in the second year we were an 8 o’clock Freak of the Week, chasing monsters. It became a different show, and that was one of the problems we faced. I can only look at my own career and say what did work, what didn’t work, and why, and I think we need to just keep whittling away at [Bull‘s] concept. The key thing to me is that this is a show about human behavior and understanding it as much as you can. “Why do people vote one way or the other?” couldn’t be a more relevant question to ask, and it doesn’t just come down to black hats and white hats. I was fascinated by the [presidential] election, and I continue to be. We’re all trying to understand the world we live in, and that world is one word — people. So, a show that’s about understanding people should have a place, an important place.

TVLINE | What are you missing most about life on the NCIS set?
You know, I miss that specific camaraderie. I miss the people and smiles, the laughter. But I have had some good laughs on Bull! I felt very satiated by my experience at NCIS. As I said to you last time, it was a full circle and I felt ready to move on, and that has definitely been the case. I have no remorse or misgivings about what went down. 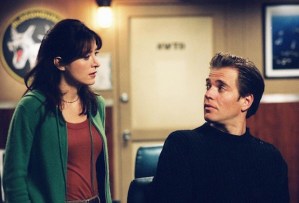 TVLINE | Lastly: When I spoke to Sasha Alexander in August, she shared that she was basically the “wingman” for you and your future, Serbian wife, because one day on the NCIS set she broke down for you the difference between Croatia and Serbia, and that ended up helping you talk to Bojana when you first met her. Does Sasha indeed get credit?
She absolutely gets credit — and so does Wikipedia, because when I met Bojana I did a deep-dive on that data. It is true, Sasha [who is also Serbian] taught me among other things how to say Bojana’s name, which is a pretty big thing, “putting the emphasis on the first syllable.”

TVLINE | Sasha said that history lesson was born out of you forever mistaking her for being Czech or whatever, until she sat you down one day….
Yeah, I would call her Hungarian, Romanian… in a very playful way! And she proved to be very helpful, so I give her full credit.

Want more scoop on Bull, or for any other show? Email insideline@tvline.com and your question may be answered via Matt’s Inside Line.