At least one member of Team Scorpion will be ringing in an unhappy new year when the show returns Jan. 2 (CBS, 10/9c).

Despite the fact that Paige’s beau, Tim, is relocating to Jordan for a new job, Walter will be no closer to a relationship with the former waitress than he was when they first met.

According to executive producers Nick Wootton and Nick Santora, Scorpion‘s first 2017 episode will find Paige giving Walter major cold shoulder for the way he’s treated her boyfriend. (In case you need a refresher: Walter has actively tried for months to exclude Tim from the team, even going so far as to give Tim an office… in the elevator. Feeling unwelcome, Tim opted to take the job offer in Jordan, where he can have actual authority over a team.) 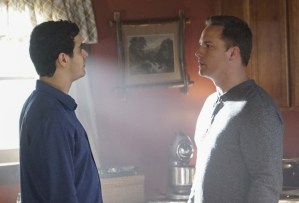 “Paige is furious at first,” Wootton tells us. “Walter, meanwhile, feels terrible about the whole Tim thing and tries to be sweet and kind to Paige with the purest of intentions.”

Paige will ultimately get love life assistance from the last person you (or she) would expect: her con artist mother, played by Switched at Birth‘s Lea Thompson.

Continues Wootton: “Eventually, Paige realizes that if Walter is going to make any emotional headway, she needs to follow advice that her mom gave her. And when [Walter] is trying to be kind to her without any ulterior motives, interesting developments arise.”

In other words? If you’re a Waige fan, you should probably keep a close eye on the second half of Season 3. Although Santora assures us that Tim won’t be completely out of the picture — he and Paige will have “daily connections via online video chats” during his time in Amman — Walter will continue trying to win over his longtime crush in the episodes ahead.

“Walter and Paige is the true relationship of the show,” Santora teases. “Despite the Tim tension, that relationship is the one that the show will focus on, despite it having its occasional speed bumps.”