When Netflix’s One Day at a Time reboot drops on Friday, Jan. 6, it will look a bit different from producer Norman Lear’s iconic ’70s series that ran for nearly ten years on CBS.

Reflecting our current times, the update follows three generations of a Cuban-American family, led by single mom/military vet Penelope (Queen of the South‘s Justina Machado). EGOT winner Rita Moreno co-stars as Penelope’s vivacious, old-school mother Lydia, and the actress has nothing but praise for the show’s honest depiction of Latino life.

After reading the script, she emailed Lear, who serves as an EP on the reimagining, with Gloria Calderón Kellett (iZombie, Devious Maids) and Mike Royce (Enlisted, Men of a Certain Age) sharing showrunning duties. “I said, ‘This is the most authentic, Hispanic-type Latino show that I’ve ever seen or read,'” Moreno shares.

That realness comes courtesy of Kellett, who was “concerned” when Lear first approached her to add a Latino voice to the project.

“‘My family’s really important to me. It’s very personal,’” she recalls telling Lear. “I know so many very talented comedians and friends that are Latino that have sold shows about their family, and it gets messed with in a way that makes it feel no longer theirs.” 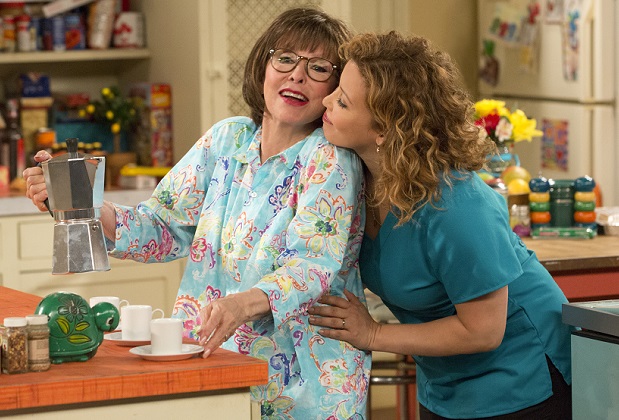 Kellett singles out Masters of None‘s “Parents” installment as an example of a cultural story done right. “I totally related to that episode, and I’m not an Asian man,” she says. “The specificity of that is what made me love it. [Norman] and Mike have been unbelievably supportive in allowing me to be really specific in telling my very personal stories. Penelope is really based on me, and Lydia’s based on my mom, and a lot of those conversations are conversations my mom and I have had.”

Having that kind of realistic Latino brood on TV is “going to remind the audience there’s absolute richness there,” Moreno believes. “We bring a lot to the table: our food, our culture, our music. I love it that we are going to show the American public something they rarely get to see.”

But the clan is a family just like any other, so “if you’re not going to like [the show], it’s not going to be because it’s too Latino [or] that you don’t get it,” Machado argues. “This is universal storytelling.”

And it couldn’t have come at a better time. The outcome of the 2016 presidential election “tells me we need to communicate more,” Kellett says. “I need to hear more, and they need to listen more, and we need to come together more. And the one place where that’s sort of happening is television. If we can have those conversations, and if we can maybe open hearts and minds and make them laugh, my God, we will do it!”

In addition to chuckles, Lear hopes the series leaves viewers with a sense of “our common humanity. I hope they take away, ‘That could be my family.'”