When Supernatural returns with new episodes on Jan. 26 (The CW, 8/7c), Dean and Sam will have been behind bars for six weeks — but don’t blame the British Men of Letters for their imprisonment.

Shutting down fan speculation that the group was secretly responsible for the Winchesters’ arrest, executive producer Andrew Dabb reveals that “it was really the government that grabbed them. It was really the Secret Service.” 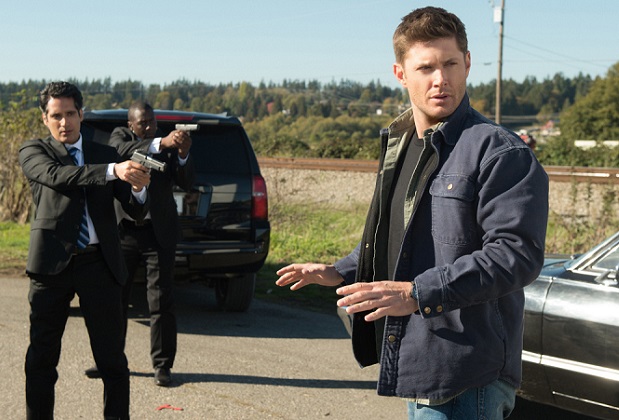 However, “the Men of Letters, like Mary [and] Castiel, are going to have a very specific reaction” to the hunters’ predicament as they take a more active interest in them — for better or worse.

“We’re going to see that storyline get fleshed out in the second half of the season,” star Jensen Ackles previewed during TVLine’s visit to the show’s Vancouver set. “There are going to be some recruitment attempts, some disagreements about methods of hunting, and that will certainly boil to a point.”

Although the Brits’ way of doing things, not to mention their handy weapons, have proven to be successful recently, “I think we’ll find out in the future that maybe their methods aren’t the best way,” Ackles adds.

For co-star Jared Padalecki, the storyline is “reminiscent of Season 6 when Sam was soulless and kind of behaved much the same way the British Men of Letters are behaving now, at least in their hunting tactics,” the actor says. “It’s fun to revisit that: Would you kill two people to save three? Would you kill 10 to save 12? You’re still killing 10 people. Would you try to find the middle ground?”

That dilemma will play “a big part” in the upcoming episodes as the brothers “see both the good and the bad” side of the British Men of Letters, Dabb previews. “Because the truth is, even if you disagree with their methods – and Sam and Dean certainly will in some cases – they get results. So that becomes the bigger punch [in the second half of the season]: Do the ends justify the means? And if so, what means are our guys willing to tolerate?”