Did Tuesday’s Scream Queens finale leave anyone else with a major case of déjà vu?

Just as the show’s first season ended with someone in a Red Devil costume scaring Chanel in the mental hospital, so too did the second season finale conclude with a reunion between Ms. Oberlin and the series’ original spookster. This time, the Devil appeared in the backseat of Chanel’s Range Rover — per her license plate, she is RICH AG[ai]N — and came bearing a gift: a sparkly little box marked with the Kappa Kappa Tau insignia. 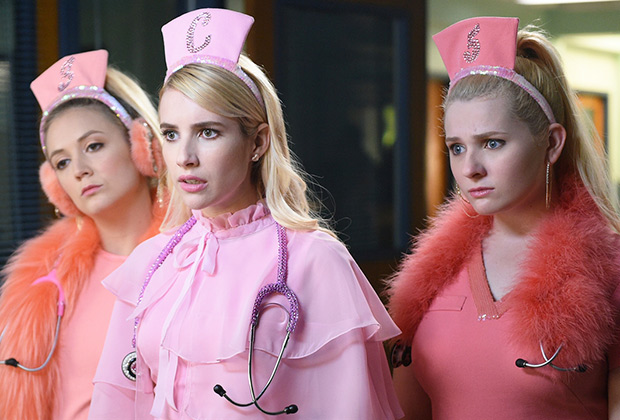 So, who was lurking beneath all that latex this time? Since we may never get an answer on screen — given the ratings this season, a renewal is looking pretty unlikely — we’re left to speculate on our own.

The obvious guess is Grace, who now has two reasons for wanting Chanel dead: Not only did Grace suffer a mental breakdown as a result of everything she experienced in Season 1, but her father also died while seeking revenge on her behalf. (Before you say anything, I know that neither of those things are actually Chanel’s fault, but we’re going with Scream Queens logic here, in which Chanel takes the blame for pretty much everything.)

Then again, because we’re using Scream Queens logic, it really could be anyone. Maybe Nurse Hoffel didn’t die in that quicksand. Maybe Hester got bored on Murder Island and returned to familiar stabbing grounds. Or maybe it’s someone we haven’t met yet, a deranged fan of talk-show hostess Chanel.

Give it some thought, then drop a comment with your guess(es) below. Also, are you hoping for a Season 3 renewal?