Showtime’s Shameless wrapped up Season 7 on Sunday night with an episode that felt like a series finale in many ways — except it wasn’t.
But considering the show’s fate was in limbo — its Season 8 renewal would not be announced until 14 hours later — it’s not crazy to think that maybe the producers took into account the Gallaghers’ uncertain future.

The season ender doesn’t feature any huge plot twists, but instead finds Frank, Fiona, Lip & Co. in a reflective state of mind as they mourn Monica in their own special Gallagher way. Fi has no sympathy for her mom, even after her death. She asks the mortuary director for the cheapest burial option and later unleashes her pent-up anger at her absentee mother, punching her body as it lies in the casket. When she turns around, a few funeral home workers are staring at her in horror and shock.

The outburst is not unjustified. As Fiona reminds Frank, she looked after him and her siblings after Monica left. She was the one who was there when Debbie got her period, and she was the one who changed Carl’s diapers, not Monica. 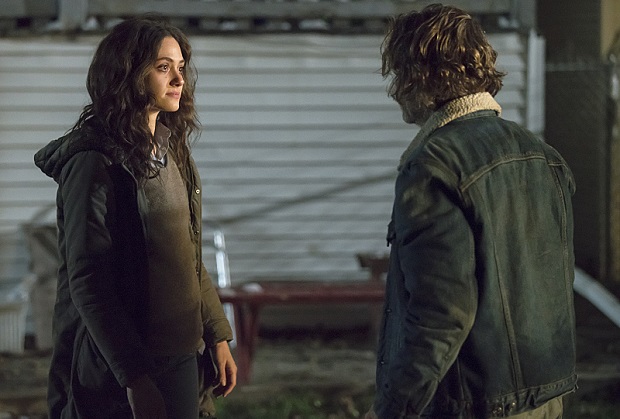 “She didn’t give a s–t about anyone, but herself,” Fiona declares. “I’m glad she’s dead. At least now she can’t f—k us over anymore.”

When it comes time to eulogize Monica, Frank tells the story of how he met his great love. (Isn’t it strange to imagine him as ever being young and in college?) He caps his tale with a beautifully moving moment that reminds you why William H. Macy keeps getting award nominations.

“Every time I look into one of you kids’ faces, I see her face looking back at me, smiling, laughing,” he says, tearfully. “She was strong, and you’re strong. She was brave, and you’re brave…. Hate her if you want, but she’s in you, and that’s a good thing.” 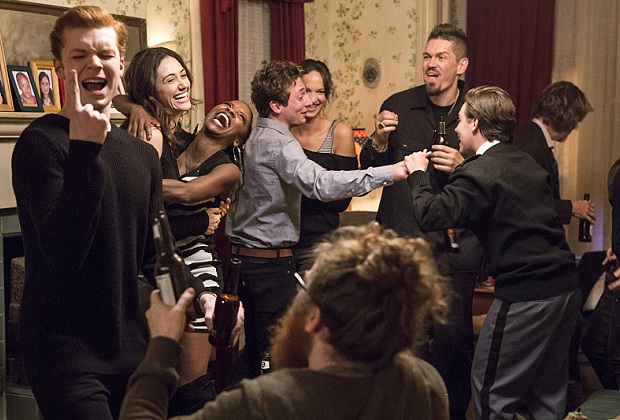 Seeing the depth of Frank’s feelings for Monica, Fiona has an epiphany of sorts. “I guess the motherf—ker really did love the crazy bitch,” she remarks to Ian as the family partakes in a post-funeral dance party to the tune of “Spill the Wine.”

That would have been a perfectly Shameless image/sentiment to end the episode on. But then we get the icing on the cake with a lovely montage of the Gallaghers continuing on with their lives: Fiona becomes the owner of an apartment building; Lip goes to a meeting; Debbie starts welding classes (and finds a new crush in her hot teacher); Ian is back on the job; and Frank watches in approval as Carl spray-paints Monica’s name on a building. There isn’t a ton of romantic closure (more on that below), but the sense of “life goes on” and cautious optimism is very series finale-ish, yes?

Other highlights (and some burning questions) from the finale:

* Monica left an “inheritance” for the kids: bags of meth, worth $10,000 each. Fiona is the only family member who is against selling them. She buries two baggies in Monica’s casket — but the other shares are still in play?

* Lip wants to go back to college, but he worries that he’s screwed up his life beyond repair. Sierra reminds him that a lot of people still inexplicably care about him. As she caresses his face, Lip smiles to himself and replies, “S–t.” He doesn’t really offer an explanation. (I took it as Lip realizing his feelings for Sierra are deeper than he thought, but hit the comments with your own interpretation.)

* Ian and Trevor’s future is uncertain after the former confesses that he was with Mickey. Trevor does attend the funeral, so perhaps there’s hope for the couple?

* Carl comes back from military school a changed young man, with a sense of discipline and cooking skills.

* Anyone else hoping to see more of Barry Sloane’s character next season?

Shameless fans, what did you think of the season ender? Grade it via the poll below, then hit the comments to back up your pick!