This Wednesday, Fox pressed play on Star, Lee Daniels’ follow-up to Empire. Will you return for an encore performance?

Touted as almost a companion piece to Empire — except that it follows young singers who can only hope to one day roar like Lyons — Star opened by quickly introducing us to two of its central three: the title character (played by Jude Demorest), a white girl who lives in Pittsburgh and has been clanging around the foster care system for years, and Alexandra (Ryan Destiny), a New York-based singer/songwriter she met “on the ‘Gram” (and who is hiding the fact that her dad, played by Lenny Kravitz, is a famous recording artist). The girls’ aim is to meet up and make it big, a plan Star fast-tracks by bailing on her verbally abusive, Straight Out of Central Casting foster fam and beseeching social services to give her the 411 on her half-sister, Simone (Brittany O’Grady). 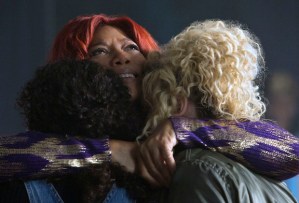 and impassioned pleas later, Star is arriving in Harrisburg just in time to save Simone from being (again) sexually assaulted by her own foster dad — by plunging a kitchen knife into the cretin’s back! The reunited kin then race off to rendezvous with Alexandra and make tracks for Atlanta, where they show up at a hair salon run by Carlotta (Queen Latifah). Having once been part of a girl group with Star and Simone’s ill-fated, drug-addicted mom, Mary, Carlotta is embraced as a mother figure to the girls (self-medicating Simone, especially), and in that capacity offers them a place to stay.

Itching to start making a name for themselves, Star, Simone and Alexandra first suss out and perform at a nearby club’s “amateur night.” They get rescued from that lame situation by one of Carlotta’s staffers, Cotton (Amiyah Scott), who points the girls to a strip club where she moonlights. Cotton suggests that a strong showing in the “Champagne room” with producer Jahil Rivera (Benjamin Bratt) could get the trio’s career on track.

Not-shy Star seizes the opportunity to squeeze into some Spandex and give Jahil a helluva private show, which (oddly, and Glee-like) dissolves into a glossy, full-blown music video performance. Whatever the case, Jahil is impressed by Star’s croon-and-grind, so he invites the girls’ “package deal” to sing at a house party being thrown by an NFL player.

On her way home from the fortuitous hook-up, Star saves Cotton from a beatdown at the hands of a man who was shocked to learn she was transgender. The shiner Cotton sports the next day at the salon triggers a talking-to from Carlotta, who apparently had some issues with her “boy” and his chosen identity. (Star meanwhile accuses stylist Miss Bruce of “racism” when her “white” intrusion is called into question.) Carlotta later shows up at Jahil’s modest digs to warn him, with a gun, to steer clear of the girls, lest they succumb to the same mistakes they and Mary did back in the day. 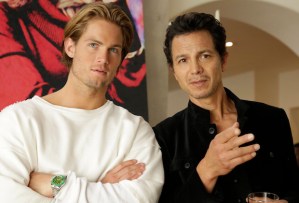 That very serious threat aside, the house party gig is apparently still on! Swathed in sequins and sparkly heels, Star, Alexandra and (a drunk) Simone deliver a crowd-pleasing performance at the NFL star’s mansion — all the more remarkable given how they were sashaying in and out of hallways and rubbing up against partygoers the entire time they sang, with zero mics. But an impression was made, as Jahil sees in the girl group his one last chance at shepherding hitmakers.

Or will the girls’ past come back to haunt them? [Cue thunderclap] We are left to wonder just that in a final teaser scene, where Simone’s foster dad awakens in a hospital, alive, and is asked to recount his stabbing….