Will a Vampire Diaries duo share one last dance? Who will ride to a Team Scorpion member’s rescue? What do we know about Bones‘ big finish? Who’s new on Zoo? Read on for answers to those questions plus teases from other shows.

Fans of The Vampire Diaries have always loved dances. Will we see Stefan and Caroline dancing this season again?—Steroline TVD
Let’s start with the good news here: Executive producer Julie Plec knows full well how much the fans value a good dance. Now for the bad: “I think I can finally admit defeat that we weren’t able to fit in a final decade dance before the series ends, which I’m very sad about,” Plec says. “But we do have Miss Mystic Falls coming up, and of course, our most famous dancing has been done there.”

I read that Ralph gets kidnapped on Scorpion. How does Team Scorpion deal with that? —Stephanie
First of all, you should keep in mind: poor Ralph is also a genius member of Team Scorpion. Secondly, that Christmas episode (airing Dec. 19) also has an A-plus homage to Home Alone, as only Walter & Co. can pull off.

After months of straight up denial, I am now willing to accept the fact that we’re onto our last 12 episodes ever… Throw me a Bone(s) here!! #seewhatididthere. —Bethania
I can’t tell you what will happen in the series finale, but I can tell you what won’t happen. Booth and Brennan will not be walking away from their respective jobs to start a new, less-dangerous life. “We did that in the Season 10 finale,” notes co-showrunner Michael Peterson. “And since we don’t like repeating ourselves, it [forced] us to brainstorm a different [conclusion].” And here’s another exclusive nugget about the Fox drama’s swan song: The series-finale episode is titled, “The End in the End.” 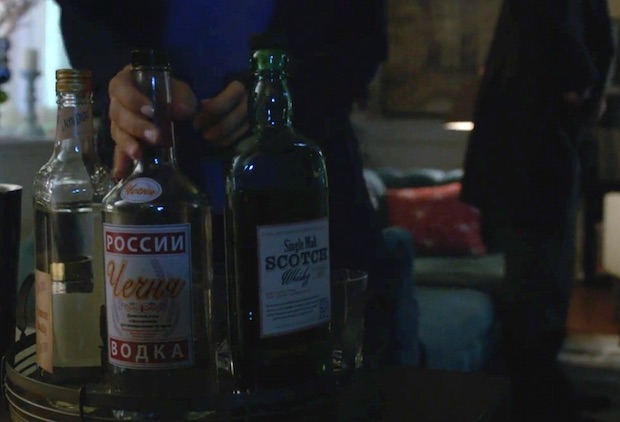 that Arrow‘s Oliver drank at Susan’s place was Russian. They even paused on the bottle for a second, so there is no way that’s a coincidence. Could he be hallucinating [Laurel]? Maybe Susan is in league with Prometheus? —Brandarsh
That conspicuous “vodka shot” was one of the first things I asked co-showrunner Wendy Mericle about during our recent chat, and after a hearty laugh, she said: “Were we too obvious with that?” But rather than offering a clue to any agenda Susan might have, it was more a nod to her ongoing investigation of Mayor Queen’s past. “I would call that foreshadowing more than anything else,” Mericle said. “Susan is certainly on that [Oliver-in-Russia] train, for sure.”

What can we expect from Klaus and Hayley’s relationship this  spring on The Originals? —Erin
“Hayley and Klaus ended Season 3 in a pretty good place,” exec producer Michael Narducci reminds us. “He was able to do what he had to in order to save his siblings, and he was able to trust his child in the hands of this woman he has come to respect and trust more than he does a lot of other people.” And it sounds like things are only going to improve when the former lovers eventually reunite: “They trust and each other and will do whatever it takes to protect their kid, and I think you’ll start to see a lot more of that. They’re not lovers, but they’re parents of this girl, and they have to be in concert if they’re going to do everything they need to do to raise her and protect her.” 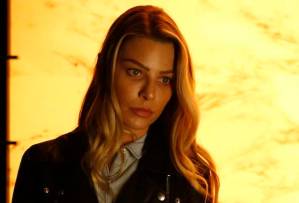 you can tease about Chloe on Lucifer? We know she’s the blessed child, but does that mean she’s more than just human? —Jenny
Pressed for what exactly to “call” Chloe coming off that fall finale bombshell, showrunner Ildy Modrovich said, “If we wanted to put a nice little label on her, I think she is, definitely, a miracle, because she wasn’t supposed to be born, and then Amenadiel came down and blessed Penelope’s womb — and that’s the only time he’s ever done that.” Meaning, “God is the one that basically put her in Lucifer’s path, and made her the only human immune to his charms.”

Any scoop on the new NBC series Emerald City? —Gina
I’m a couple hours in, and I’m digging it so far. First and foremost, it’s gorgeous. The set designs are wonderfully innovative (and sometimes super-creepy). Adria Arjona — who after some head-scratching I eventually realized played Person of Interest‘s Dani Silva — is magnetic as Dorothy, while Romanian actress Ana Ularu appears to be having a helluva time as (the Wicked Witch of the) West. My only quibble so far: amid the intricate world building, the storytelling is just a tiny bit glacial.

Any early word on Season 3 of Zoo? — Meesha
Casting is currently underway for several roles, including Jackson’s “future” girlfriend; a deadly bi-racial operative with a surprising tie to one of the heroes; and a young woman who looks an awful lot like [Spoiler]! 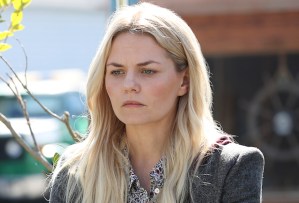 Once Upon a Time‘s Gideon wants to kill Emma? Is it because she’s the Savior, or does he have his own reasons? —Rebecca
“‘Why does he need to kill her?’ is the real question,” says co-creator Eddy Kitsis — but we will have to wait (many weeks) for the answer. Until then, Adam Horowitz previews, “We pick up with that [pawn shop] scene, and Gold and Belle will articulate some of the questions that our viewers have” — including: “What happened to Gideon? Why is he seemingly after Emma? And in her vision, what is motivating him?” — “and most of that stuff gets answered pretty quickly.” (For more on Once, I teased Episode 12 in this week’s Ask Ausiello Live.)

Got any scoop on Grimm? —Jen
Episode 3 of the new season (premiering Friday, Jan. 6) has a pretty cool fight between two-ish characters you might not expect.

Eagerly awaiting the return of both 24 and Prison Break, so if you have any scoop on either, spill it…. —Michelle
I haven’t laid eyes on Prison Break yet, but 24: Legacy is sufficiently reminiscent of Jack Bauer’s earlier bad days. In the style of SNL‘s Stefon, it’s got everything: A hero with almost no one he can trust. A sought-after McGuffin. Nosy CTU computer wonks. Ambitious politicians. Important people getting sneaked up on and tasered. I would certainly give it a look. 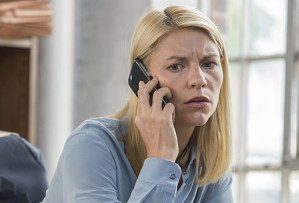 for a Homeland scoop. I’ll take anything! —Jess
With Season 6 nearly a month away, we can probably talk about the elephant in the hospital room — meaning, the fact that [well-known Spoiler] is alive. “We really thought that Carrie was going to kill him at the end of the season,” showrunner Alex Gansa says of Quinn’s stroke and the lead-up to Carrie pondering pulling the plug. “And then when we got there, we just couldn’t do it. There was the whole business about her faith and this newfound Catholicism, and we were like, ‘I just don’t think she is going to kill him at the end.'” The even better news for Carrie/Quinn fans is this: “The Quinn you’re going to see this season is not the Quinn you’ve seen before,” Gansa shares, “and that’s going to actually open up possibilities between him and Carrie.”

Now that Ghost Rider is gone, will Agents of S.H.I.E.L.D.‘s Daisy go back to her Inhumans storyline? —Lee Lee
Coming off her most unexpected “rejoining” of S.H.I.E.L.D. in the fall finale, Daisy aka Quake “has been thrust into a new role,” says showrunner Jed Whedon. “For one, she’s now famous, which changes your dynamic. So she’s going to have to just be a soldier for a little while”— and thus set aside any lingering emotional issues (though as Whedon teases, “They will probably rear their ugly head in ways that she’s not ready for”). As for returning to her powered roots, “We’re not focusing on Inhuman lore right now,” the EP says, “because we were knee-deep in it for a while.”

Real questions, real answers! If you need the Inside Line on a favorite show, email InsideLine@tvline.com!  (With reporting by Andy Swift, Vlada Gelman and Scott Huver)