The Golden Globes love two things: new TV shows the Emmys haven’t honored yet, and lavish British period pieces. So it’s not a shock that Netflix’s The Crown scored three Golden Globe nominations on Monday morning, including for Best Drama Series and acting nods for stars Claire Foy and John Lithgow. The awards buzz surrounding The Crown have some calling it “the next Downton Abbey,” but here’s the thing: It’s actually much better than that.

It’s natural to compare the two shows, with both taking place in early 20th-century England and filtering momentous world events through the well-decorated homes of the rich and privileged. But while Downton relied on tired soap-opera twists in later seasons, The Crown — centered on the first few years of Elizabeth II’s reign as Queen of England — crafts a richly compelling tale of one woman’s uneasy rise to power… and the many complications that come with it.

Haven’t pledged your allegiance to The Crown yet? We’ve got five reasons why you should put on a pot of tea and make this your holiday-season binge. 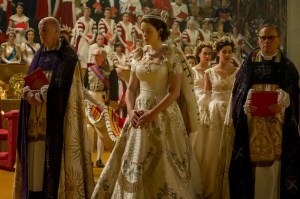 1. The production values are dazzling.

If you watched Downton strictly for the period-piece eye candy, you’ve come to the right place. The Crown is filled with sumptuously sun-dappled interiors, enviable period fashions and gorgeous cinematography of centuries-old castles and rolling mountain landscapes. Some scenes, like Elizabeth’s tradition-steeped coronation at Westminster Abbey, are so beautifully shot, they’re positively breathtaking. (You could watch this show on mute and still marvel at the visuals.) Season 1 of The Crown cost Netflix a reported 100 million British pounds to produce… but every last tuppence of that is up on the screen.

Before watching The Crown, you might think Queen Elizabeth has had a relatively uneventful reign as monarch. But creator Peter Morgan (whose script for 2006’s The Queen won Helen Mirren an Oscar) finds quite a few obstacles for the new queen to navigate, including the failing health of British prime minister Winston Churchill, an ominous nuclear test by the Soviet Union, and the British Empire’s tenuous hold on its colonies around the world. One episode focuses on the Great Smog of 1952, a thick layer of pollution that settles over London and kills thousands of residents, and it plays like a life-or-death, apocalyptic thriller. 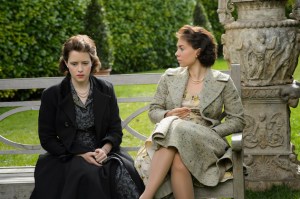 3. … but the personal conflicts may be even more treacherous.

The greatest threats to Elizabeth’s rule actually come from within, as her family’s decisions force her to choose between the throne and the people she loves. Some of The Crown‘s most powerful scenes spring from the battle of wills between Elizabeth and her sister Princess Margaret, a headstrong party girl who wants to flout convention by marrying a divorced Royal Air Force captain. But even those scenes are topped by Elizabeth’s marital strife with her husband, Prince Philip, who’s emasculated by his wife’s ascendance to the throne. (He even resents having to kneel before her during her coronation.) Her clashes with Philip culminate in a shockingly raw, ashtray-throwing argument, proving that The Crown doesn’t shy away from the more unflattering parts of Elizabeth’s life story. 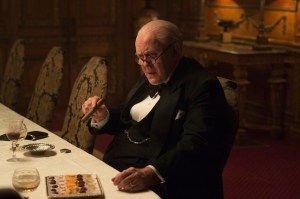 4. The performances deserve a king’s ransom of awards.

From top to bottom, The Crown‘s cast is stellar, including Vanessa Kirby as Princess Margaret, Mad Men alum Jared Harris as Elizabeth’s father King George VI and former Doctor Who Matt Smith as Prince Philip. But Foy’s performance anchors the series; it’s a star-making role. Her clipped, formal tone as Elizabeth reflects the new queen’s comfort with tradition, but her piercing blue eyes convey a fierce independent streak as well. (For more Foy, check out her tremendous turn as Anne Boleyn in PBS’s Wolf Hall.) And Lithgow — an American, last time we checked — fully inhabits the iconic Winston Churchill as a lion in winter, a proud man whose will to lead is outlasting his body’s will to continue. Both of them better make sure their calendars are cleared for next year’s Emmys ceremony.

5. And there are still many more stories to tell.

One of the most exciting things about The Crown is all the places it can go from here. The ten-episode first season ends in 1955, only covering about the first four years of Elizabeth’s reign. As we know, Elizabeth still reigns to this day, which means there are decades of material left to explore. And Netflix is reportedly planning a whopping six-season run, told across six decades of Queen Elizabeth’s life. If that means more great TV like Season 1, we say: Long live The Crown!