Warning: The following contains spoilers from Sunday’s midseason finale of The Walking Dead.

Has a television character ever had a bigger target painted on his back than The Walking Dead’s Negan? Going into Sunday’s midseason finale, it wasn’t just individuals like Maggie who wanted to see the Saviors’ sadistic leader pushing up daisies, it was whole communities. Alexandria. The Hilltop. The Kingdom. Oceanside. Hell, even his own henchmen would probably have been more relieved than upset to see him go bye-bye. But alas, the villain survived “Hearts Still Beating.” Could we say the same about (all of) our heroes? Read on and find out, then grade the super-sized installment in the poll below.

‘CARL, PASS THE ROLLS… PLEASE’ | Early on in the episode, Gregory continued to antagonize Maggie (this time in front of Eduardo, who called him on his B.S.); Daryl left his cell; Spencer sucked up to the Saviors (and even flirted with one); Negan shaved off his stubble in front of Carl and Judith (“always against the grain”); and Tara delivered the jerk’s lemonade to Olivia, even offering to take her place. But Olivia, further endearing herself (to me, anyway), refused to be spelled; she wanted to keep her promise to Rick to look after Judith. At “supper,” Negan declared that he couldn’t wait for Rick to show up anymore. “Lucille is hungry.” 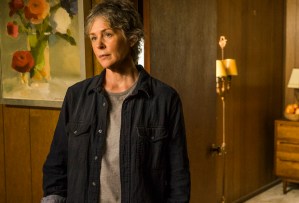 Speaking of hungry, Daryl found time to make a quick snack of a jar of peanut butter on his way out of The Sanctuary. (He also got to change out of his prisoner drag.) Meanwhile, Richard stopped in at Carol’s just when Morgan was paying a house call. Ezekiel’s security head argued that the Saviors couldn’t be trusted and asked the duo to use their influence to convince the king to attack the bad guys before something went wrong and they attacked The Kingdom. When Carol and Morgan both refused, Richard angrily told them that, when people died because of their inaction, their blood would be on the pair’s hands. Then again, he added, “Maybe you’re both used to that.” 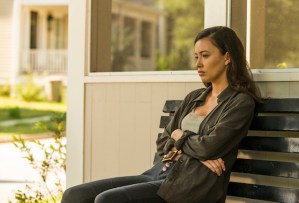 ‘I’LL PULL THE TRIGGER’ | Off his disappointing meeting with Carol and Morgan, Richard made his way to a camper (his family’s?) where he broke down and wept. Meanwhile, in Alexandria, Rosita confessed to Gabriel that she didn’t care if she got killed taking out Negan “as long as he goes first.” Reminding us of what a complete turnaround he’d done since he was selling out Rick & Co. to Deanna, the preacher wisely, sweetly advised Rosita that they’d win in time. But “we need to wait for the right moment, or create it — together — and you’re a part of that… We need you.” Later, she caught Spencer on his way to kiss up to Negan. “Why’d you even start” whatever we had, he wondered. “I used you,” she replied. “I’m sorry.” Still, he asked her out to dinner — just dinner, no strings — and she agreed.

In the field, Aaron was nearly killed by walkers as he and Rick canoed their way to the houseboat full of weapons in the lake. Their mission was successful; however, they were spotted by someone (perhaps the houseboat’s owner, who they assumed was deceased… all we saw was a boot). Anyway, Aaron reaffirmed his commitment to Rick and his decision to do whatever they had to in order to maintain a pulse. Upon returning to Alexandria, Rick was prevented from heading straight to his house — and Negan — by David. When the Saviors finally did let Rick go, it was only so they could beat up Aaron (thanks to a nasty note they found from the houseboat owner). By then, Spencer was warning Negan that Rick has a history of not playing well with others. 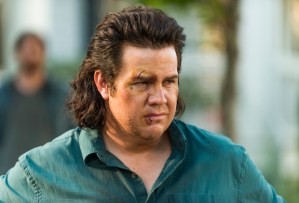 ‘HIS EGO’S OUT OF CONTROL’ | On and on, Spencer badmouthed Rick… and suggested that he himself step in as leader of Alexandria. In response, Negan noted that Rick was “swallowing his hate and getting s— done. That takes guts. And then there’s you, the guy who waited for Rick to be gone” to try and take his place. Why didn’t Spencer just kill Rick himself and take over? Negan’s guess? Spencer had no guts. At that, Negan stabbed Spencer, revealing that, well, whad’ya know? He was full of guts. “I’ve never been so wrong in my whole life,” Negan chuckled. When no one would join him to finish the game of billiards that he and Spencer had started, at last, Rosita pulled her gun and fired!

Alas, she only hit Lucille. Realizing that the bullet was homemade, Negan decided not to let Arat deface Rosita if she told him how she got it. Since he didn’t believe that she’d made it herself, Negan ordered Arat to kill somebody, so the Savior swung around and shot Olivia. Arriving on the scene, Rick fought to contain his rage. “Your s—’s waiting for you at the gate,” he told Negan. “Just go.” But he wouldn’t, not until he found out who made the bullet. Rather than let Negan hurt anyone else, Tara said it was her. Then Eugene bravely piped up and admitted that it was him, and was taken away by Negan. Just then, Spencer turned, and at least Rick got to dispatch Walker Spencer.

‘YOU DON’T KNOW ME’ | En route to Negan’s, Michonne asked her Savior hostage how long she’d been with the villain. But the woman refused to talk. “I’m not gonna kill him today,” Michonne said. “I’m gonna find a way that we win.” (Good luck with that.) Showing Michonne the scope of Negan’s control, the Savior said her captor still had choices. Michonne should kill her and make the car disappear. She even helpfully noted that there was a silencer in the glove compartment. When Michonne returned to Alexandria, she told Rick — who was plotting in what looked like a prison cell — she’d found what she’d been looking for. “We’re still standing, and we’re gonna keep standing,” she said. “How do we make that mean something?” They had to fight. For Judith. Carl. Alexandria. All of them. “We can do this,” she said, “but only if we do this.” Luckily, “I know that now,” he responded.

Leaving The Sanctuary, Daryl was spotted by Fat Joey, who was quick to say whatever, man, just go. But Daryl didn’t just go at all; just as Jesus happened upon them, Daryl murdered the plus-sized Savior. At The Hilltop, Maggie and Sasha’s heroism had made them mega-popular — and a real threat to Gregory. In no time, Enid figured out that Sasha was “lying to Maggie about Jesus” leaving that day rather than earlier. Sasha admitted that, duh, she wanted to kill Negan. But “it isn’t just you,” Enid insisted. Other people wanted to do him in, too. It didn’t feel that way to Sasha, though. As the episode concluded, Rick, Michonne, Tara, Rosita and Carl showed up at The Hilltop to tell Maggie that they were ready to fight, and who was there but Daryl, back with Jesus. So we ended the midseason on (kinda) a positive note. (Sorry, Olivia.) Oops — no, that wasn’t the ending. After that, we saw whoever that was who’d spied Rick and Aaron at the houseboat keeping an eye on Alexandria.

What did you think of the midseason finale? Grade it in the poll below, then back up your assessment in the comments.