We’ve got questions, and you’ve (maybe) got answers! With another week of TV gone by, we’re lobbing queries left and right about shows including Westworld, The Walking Dead, The Flash, The Middle, Pitch and more! 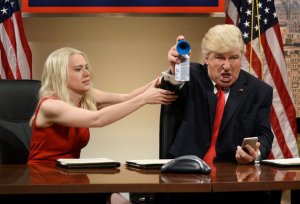 Saturday Night Live‘s Kate McKinnon ultimately get more comedic mileage out of playing a self-hating Kellyanne Conway versus Hillary? Also, if Jennifer Aniston had glommed onto one more sketch, would you have wondered why she didn’t just bite the bullet and host herself?

2 | On The Walking Dead, if Negan’s “You break a rule, you get your face ironed” policy is as well-established and non-negotiable as it seemed last Sunday, how come he didn’t burn Daryl when he tried to escape four episodes ago?

3 | Westworld‘s answer to the season-long maze mystery: so simple it’s perfect, or a total letdown?

4 | After the 93-minute Westworld finale and this season’s super-sized Walking Deads, can we pass a TV law mandating that hour-long dramas keep their episodes to, you know, one hour, max?

5 | Last Man on Earth viewers, did you catch when during their days-long search Erica said Melissa could be in “another country”? Was that meant to be taken in jest, or is the show setting up the potential for international survivors?

8 Shows on the Bubble

6 | Are you feeling the chemistry between Timeless‘ Lucy and Wyatt, or do you prefer them as friends? And how great was Jacqueline Byers, who played the infamous Bonnie Parker?

7 | On The Flash, as if Julian’s hunt for the Philosopher’s Stone wasn’t enough of a fun Tom Felton/Harry Potter wink, should Caitlin have offered him Butterbeer at the party versus eggnog? (Speaking of which, Caitlin and Julian are totally happening, right?) Finally, did Savitar’s prophecy about one of Barry’s friends betraying him and another dying remind you of the last season of The Originals?

8 | We know This Is Us‘ flashbacks take place in a simpler time, but should Kevin and Randall really have been allowed to roam the hospital unattended? Meanwhile in the present, why should Olivia’s exit shut down the play — wasn’t “The Manny” the draw? And would Andy’s near-suicide have had more of an impact if we had, you know, met him before this week?

9 | Were you having Dawson’s Creek flashbacks on Tuesday, between Mr. Leery’s appearance on The Flash (as Jay Garrick) and Mr. Potter’s guest spot on This Is Us (as Sloane’s dad)? 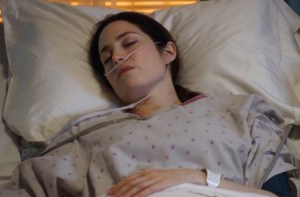 10 | For those in the Venn diagram overlap between Chicago Fire and Rookie Blue, was a dark-haired Charlotte Sullivan (aka Gail) almost unrecognizable as the leukemia patient Severide decided to help?

11 | To viewers of The Middle, we have to ask: Do any of you actually enjoy when Brooke Shields turns up as Rita Glossner?

12 | What Today producer thought that centering multiple (!) segments on the saga of Tamron Hall’s missing artificial Christmas tree was a good idea?

13 | When is Empire‘s Cookie going to firmly, loudly and definitively stand up to Lucious in defense of her sons? And is Nessa’s “Black Girl Magic” fresher than anything Tiana’s released in eons?

14 | As TVLine reader JR smartly asks: Couldn’t The Flash‘s H.R. have outfitted Arrow‘s on-the-lam Diggle with one of Earth-19’s facial transmogrifiers, to avoid capture by the authorities?

15 | Does Criminal Minds‘ conspicuous and seemingly needless addition of an eighth (!) team member have you worried that another longtime agent will leave us (or, gulp, leave us) by season’s end?

16 | Was Hairspray Live! host Darren Criss too busy with his final weeks starring in Los Angeles’ Hedwig and the Angry Inch to assume a full-on role in the live musical? Because it was an awful tease having him so nearby the singing/dancing action.

17 | Have our three-camera sitcom standards dropped precipitously low or does Netflix’s One Day at a Time reboot look halfway decent? 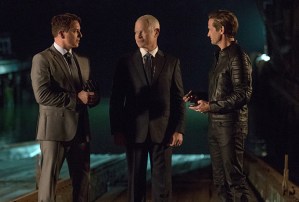 the part where Legends of Tomorrow explained how (and from when in time) Damien and Eobard recruited Malcolm Merlyn? Since when can Reverse-Flash “vibrate” into looking like another person? And did that (WTF?!) meta ending make you think you were suddenly watching a Supernatural episode?

19 | Pitch kinda has to get a second season after that cliffhanger finale, doesn’t it?

20 | Why does everyone on Fuller House give D.J. such a hard time about “still” being single? How about a little sympathy for the woman whose husband died in a fire two years ago, leaving her with three rowdy children?

21 | How disappointed must have the Project Runway contestants been when they found out they weren’t jetting off to an international fashion capital, but a Best Western Plus in Austin, Texas?