Let’s nominate Andre Lyon to compete on an upcoming episode of Chopped.

Mind you, I have absolutely no idea if Empire‘s eldest son has any culinary skills whatsoever, but what he does (or had done) to a precocious little girl’s lustrous locks on this week’s episode tells me the man knows what to do when armed with a pair of kitchen shears.

Cruel? Perhaps. (Though isn’t it time the Dorothy Hamill made a comeback with the 10-and-under set?) But there’s no denying Dre’s methods prove effective in bending Gina Gershon’s absolutely ridiculous/fabulous/not-so-subtly racist fashion designer Helene von Wyatt to his will.

And anything that gives us Nessa’s bangin’ new single “Black Girl Magic” over tired Tiana’s umpeenth hip-sway gets my stamp of approval.

In other news, Boo-Boo Kitty’s in heat, Leah’s in potentially hot water, and poor Jamal’s getting a lukewarm reception from his family when it comes to his latest songwriting escapade as well as his new attitude. (Ooh-ooh-ooh-ooh-oooooooh.)

With that said, let’s recap the action from Season 3, Episode 8, “The Unkindest Cut” — complete with homages to The Godfather and Showgirls — and a touch of shade for Taylor Swift and Ariana Grande. 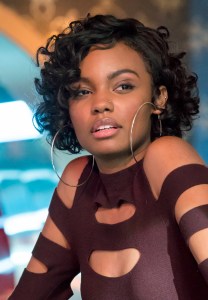 THAT! GOWN! IS ON FIYAAAAHHHH! | Cookie mashes up her street-friendly label with Helene’s couture line by scoring Tiana a slot as the centerpiece of the loopy designer’s latest show — impressing Angelo’s highfalutin mama in the process. Still, there’s an undercurrent of uncomfortable to the partnership, what with Helene yapping about straightening Tiana’s hair to conform to the “sleek” lines of her collection. Nessa however, watching from the sidelines, sees nothing but beauty, or at least opportunity, sighing three magic words to Andre: “I want this.”

Before you can say “highly flammable,” Nessa is shadowing Tiana, and “accidentally” laying her white silk von Wyatt couture next to a blazing-hot iron. When the frock ends up crispier than the body Lucious left in D.A. Roxanne “Boobs McGee” Ford’s passenger seat, Tiana erupts, complaining Helene is only working with her to make up for a P.R. disaster in which her Out of Africa collection went public without a single black person in sight. (Wait? Isn’t Serayah part of Taylor Swift’s squad? Ugh, I just used the word “squad.”)

When footage of Tiana’s rant leaks on the internet, Porsha declares it “no worse than that girl with the ponytail lickin’ on a donut,” but Helene is already backtracking, mulling Ellie Goulding as a replacement despite Andre’s full-court press to upend expectations by going with an artist “who’s more black” (aka Nessa). “Your daughter has such beautiful hair,” grins Andre, as he exits, and before you know it, Godfather-esque music fills the air as the little girl wakes up with her tresses in distress — unceremoniously hacked off and strewn about her pillow. 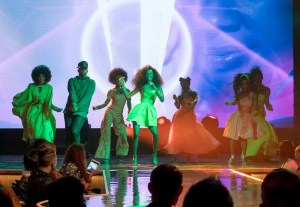 Just like that, Nessa’s on stage with the elecrifying retro R&B thumper “Black Girl Magic,” Hakeem and Tiana plot revenge from the couch and Helene warns Diana Dubois that the Lyons are “actual gangsters.” I mean, she can’t be racist if her kids go swimming with Michael Strahan’s girls, right? (Please, internet, don’t miss the overt saracasm of that last sentence!)

ANIKA CALHOUN, IN THE DINING ROOM, WITH THE, UMMMM… “CANDLESTICK”? | “I hope the butter knife is dull,” grins Cookie, upon hearing Lucious is taking his mother Leah and his bride Anika to tea to iron out their differences. Turns out, though, the outing is pure theater: Lucious erupts on his mama, she claims he’s hurting her, and before you know it Lucious’ half-brother/FBI nemesis Tariq is secretly pumping Leah for intel and promising her protection. “They do dirty, nasty sex,” Leah hisses about her son and Anika, as if that’s something illegal. But she’s also 100 percent correct, as we learn from seeing Lucious and a lingerie-clad Fake-Ass Lena Horne intertwine like mashed potatoes and gravy at the very table where Juanita is called on to put out the good silver and china. “Stop it! Sodom and Gomorrah! Stop it right now! Humpin’ on the table like yard dogs — that’s where I eat!” screams Lucious’ mom. To which her son replies — so gross it should be illegal — “I was just about to have a snack.” Did I mention Leah is working on Lucious’ behalf, though, giving him inside scoop about Tariq’s jealousy (he only got to meet his and Lucious’ mutual biodad on one occasion) and misdirecting the lawman’s investigation? I didn’t see that one coming! 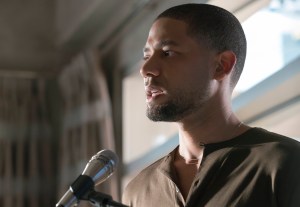 JAMAL’S WORST FAMILY GATHERING EVER? | Philip tries to help Jamal overcome his PTSD with a virtual reality therapy that might be real (I haven’t had time to Google it) but looks a wee bit silly on screen. When Lucious walks into the room and begins huffing and puffing, though, his son’s vitals skyrocket, and Philip realizes Lucious is Jamal’s trigger (pun totes intended)!

Jamal, as he tends to do, turns to music, penning a scathing indictment of Lucious called “Cold Cold Man” that moves Cookie to tears, leaves Andre and Hakeem squirming and results in Lucious making that old homicidal face again. We get a rehash of his indignant “You wouldn’t have anything if it weren’t for my ugly business!” speech, but Jamal counters by acknowledging his dad’s contribution, then noting “you have to lead us someplace other than heartache — or we have to leave you behind.” When he looks around for support, though, it’s nowehere to be found — and things get even more uncomfortable when Lucious spills the beans that he killed Frank Gathers at the request of an in-peril Cookie. See, it’s not all black and white — even if Cookie’s outfit reflects that exact color scheme!

ALSO | Andre is still hearing Rhonda’s voice (¡!). And I think it’s implied Lucious is dippin it and doin it with his manicurist (¡¡!!).

What did you think of this week’s Empire? Who’s already in the process of downloading “Black Girl Magic”? Share your thoughts in the comments!