The midseason finale of The CW’s Arrow featured a rather tragic death, as well as an equally (perhaps more?) surprising return. And few were left as gobsmacked as series lead Stephen Amell.

In short: In the course of tracking Prometheus and an ever-growing trail of clues tied to Oliver’s early days as The Hood, Oliver fwip!‘d several arrows into his leather-clad foe — only to discover that he had been duped Dark Night-style, that inside the costume/mask was a gagged Detective Billy Malone aka Felicity’s boyfriend!

Oliver reports back to Felicity, at the lair, on his role in killing Billy, then accepts Prometheus’ postulate — Oliver Queen kills everything he touches. Oliver later shares a version of his no-good, horrible day with Susan Williams, as we see a montage of Felicity sobbing over dead Billy… Curtis crying over Paul walking out on his lying vigilante husband… and on-the-lam Diggle being nabbed by authorities, after being lured into a trap by Prometheus. Susan echoes some advice that Thea gave earlier, that people leave two legacies behind them, good and bad, and Oliver needs to not fixate on the latter. She also says he should not shut out people — including a certain “superhot reporter” (as Felicity herself put it), who proceeds to soothe Mister Mayor’s emotional wounds with kisses. 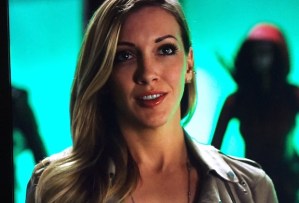 Oliver returns to the lair, where he comes face to face with… a seemingly alive-and-well Laurel Lance. “Hi, Ollie….”

“Is Laurel really alive? I guess we’ll have to tune in [next episode],” Amell teased during a Facebook Live chat following the midseason finale. “People don’t just come back from the dead. Obviously there will be some sort of vetting process [to determine if it’s really her]. We delve into that when we come back in the New Year.”

Amell went on to say, “This was the first script in a long time where I read what happened in Act V and it legitimately freaked me out,” adding: “Ultimately where we go in [Episodes] 10, 11, 12, 13,” starting Jan. 25, “is a very cool development. And it certainly raises the stakes for Mr. Prometheus.”

* In fighting Prometheus, Oliver noticed that hie adversary employed a very specific move that Oliver himself learned years ago from a woman in Russia. Oliver also realized that Evelyn is in cahoots with Prometheus.

* Rene and Diggle bonded some over the latter’s discovery that he had a daughter in Flashpoint. Rene also seemed to indicate he might have a kid of his own out there. Rene also wondered if he and Thea dated in Flashpoint — “fat chance,” Rory more or less says.

How do you think Laurel is back (or “back”)? Share your knee-jerk theories in Comments, then grade the midseason finale.