The CW’s The Flash has entered the winter break, leaving behind a series of chilling reveals — the most harrowing of which slaps an expiration date on a team member.

Needing a consult on the Savitar situation, Barry sped off to Earth-Three to fetch Jay Garrick, who explained that the steely “speed god” was the first person to be granted extraordinarily fleet feet. Once the speedsters return to Earth-One, Iris shares this curious nugget with Barry — that an excavation in India that Julian led years ago, to find the Philosopher’s Stone, left behind four dead scientists. Is Barry’s former supervisor keeping a huge secret?

Barry and Jay race off to confront Alchemy (Julian?), who is holding court with Savitar’s disciples and preparing to restore the power of all Flashpoint metahumans. When Savitar himself appears, Jay takes on the speed god, while Barry beats on Alchemy. Savitar is about to run through Jay with his blade when Barry returns the stone to its box and closes it, at which instant the speed god vanishes. Then, beneath Alchemy’s mask, Barry finds, yes, Julian.

Thrown into the Pipeline, Julian pleads his innocence — convincingly enough that Barry & Co. do wonder if something else is at play here. The Flash asks Julian if he has ever blacked out/had “missing” time, but the prisoner is reluctant to play along — until Barry removes his mask, to gain Julian’s trust. After marveling at Mr. Allen’s deception some, Julian shares that years ago he had a vision of his dead sister, urging him to find the stone, so that she could be back in his life. He thus set off on the India excavation, at which point he started blacking out. As Julian unspools this story, Cisco is in the lab having visions of dead Dante, who is similarly convincing him to take out the stone, so that they can be brothers again. Cisco does so, triggering Savitar’s appearance. Barry and Wally do their best to fend off the speed god, but lose the upper hand. Savitar is going in for the double kill when Caitlin just barely convinces Cisco to snap out of it and close back up the box, lest Barry and Wally die.

Afterward, Cisco gets the idea to synch up Julian’s brain to Savitar — allowing him to give voice to the team’s new nemesis. Through Julian, Savitar boasts of “holding the power of life and death over all” of Team Flash, saying he knows their f”ears and weaknesses, and destinies.” Case in point: Savitar shares that one team member will “betray” Barry, that “one shall fall,” and one “shall suffer a fate worse than death.”

Barry asks the almighty Savitar why he hasn’t destroyed them already. Savitar explains that Barry’s future self “trapped me in eternity,” and as such he will one day “feel my wrath.” To silence Savitar once and for all, Jay suggests that they lob the box into the Speed Force, where it can never be found. And by combining speed with Barry, they do just that — though the jolt of the experience catapults Barry five months into the future (May sweeps!), where he watches himself beg Savitar not to run Iris through with his blade. And yet Savitar does just that, gloating, “You lose, Barry.”

Jay yanks a distraught Barry back into the present, then — upon hearing of Iris’ grisly fate — assures Barry that what he saw was but one of “infinite” possibilities for the future, that every action/decision he makes changes things. Instead of trying avert that outcome, Barry needs to “focus on the here and now,” Jay says — and to that end, after a “white Christmas” (thanks, Caitlin!) at the Wells house, Barry whisks Iris away to reveal his gift to her: a nifty apartment aka their new “home,” which they promptly christen with much kissing and such.

Elsewhere in the fall finale:

* Wally revealed that H.R. had been training him, which caused Joe among others to bristle. But as H.R. explained, Wally has a potential to be pursued, with proper guidance — lest he look elsewhere. Joe ultimately comes around to that line of thinking, gifting his son with a speedster suit at the party. 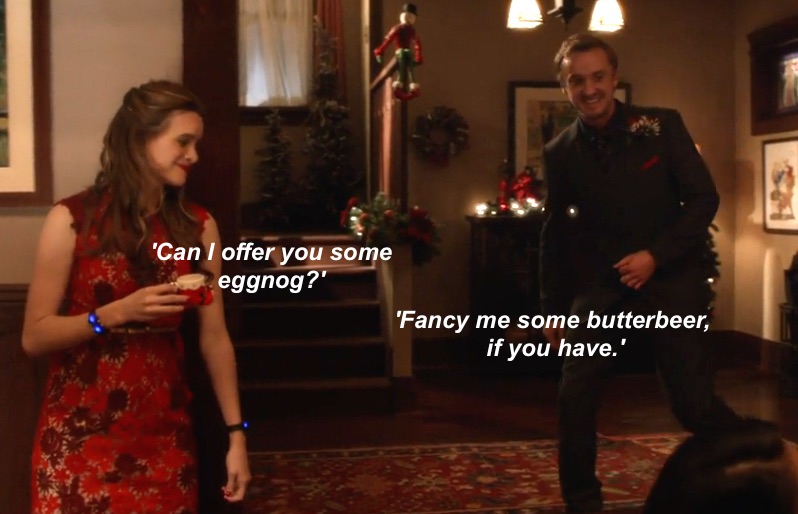 with that frightful future, Jay returned to Earth-Three.

* Julian initially brushed off Caitlin’s invitation to the West family gathering, but wound up showing up, to give Barry his job back and guzzle some butterbeer eggnog.

* Iris got Barry a wallet.

What did you think of “The Present”?