Chicago Fire‘s 100th episode on Tuesday night found lovebirds Dawson and Casey finally tying the knot after the prospect of adopting Louie became a reality. Rather than making a big to-do, they snuck away for an impromptu civil ceremony attended by their firehouse family. But the happy day was marred by the unexpected arrival of Louie’s dad, who declared that he wants his son back.

Elsewhere, Severide confessed to Casey that he couldn’t remember his one-night stand’s name, and he didn’t feel anything during a particularly dangerous rescue. While treating the firefighter at Chicago Med, Clarke urged Severide to have his bone marrow tested in the hopes of helping a leukemia patient (played by Rookie Blue‘s Charlotte Sullivan). The doc later warned Severide that if he goes through with the transplant, he will feel it for months, to which Severide replied, “Good.”

Below, executive producer Derek Haas talks about finally taking the plunge with “Dawsey,” exploring a different side of Severide and more. 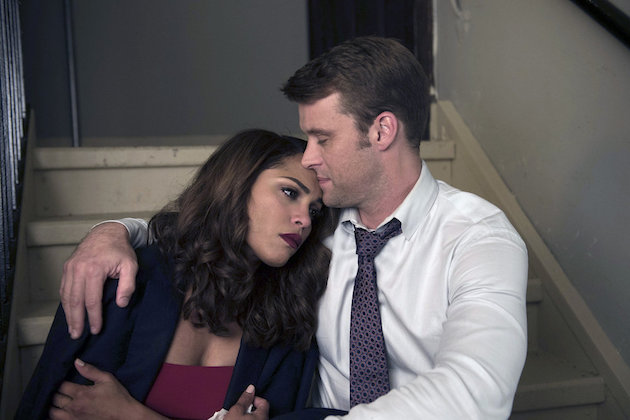 TVLINE | Why was now the right time for Dawson and Casey to get married?
Well, we certainly hinted at it through the course of not only this season, but the previous two seasons. [Laughs] You can only do that so many times before you start upsetting people. I think with the addition of Louie into their lives, solidifying them as a family, and the longing for Casey to be not just Mom and Matt to Louie, but Mom and Dad, it felt right.

TVLINE | If Louie hadn’t come into their lives, would they have still gotten married?
I don’t know that [they would have] this quickly; he certainly was a catalyst. But yeah, when [Casey] showed up at her door at the end of last season, we were saying to the audience, “We’re going to stabilize these two for a while.”

TVLINE | It was a very moving but low-key ceremony. Was there any temptation to go all out and give the characters a big wedding? 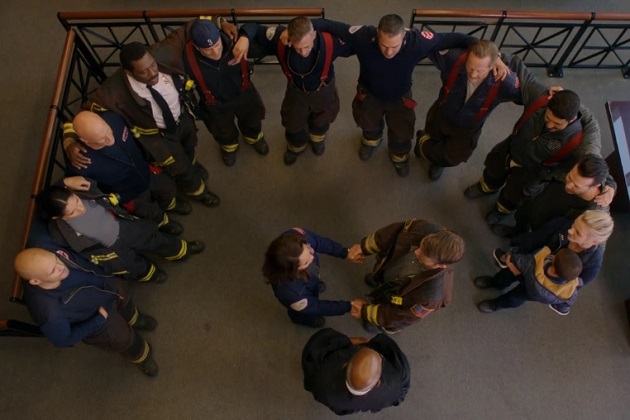 No, we talked about it back in June when we first started planning… We did a firehouse wedding in tuxedos for Boden, and the little wedding at Molly’s for Mouch and Platt, and so [executive producer] Michael [Brandt] was like, “Wouldn’t it be cool if they got married in their turnout gear, coming from a call, and [we] put everybody in the uniforms they were wearing when this show opened in 2012?” So that was the catalyst of, like, how can we do it differently, and yet be organic and germane to the show, and still make it sweet and loving and all of those things?

TVLINE | And thank God Sylvie seems to have psychic powers and knew exactly where Casey and Dawson were going.
[Laughs] Well, they had been talking in front of her [about] the adoption. But yes, when she sees them go, she’s got that intuition working, which is also a good reason to get Antonio there [at the courthouse].

TVLINE | Louie’s father, rather than just approaching Dawson and Casey, lurks around them. Is it safe to assume then that his intentions are not good, just by the way that he comes into the picture?
[Laughs] There’s two things going on there. One, we didn’t want it to just come out of the blue at the very end, because then it’s like you didn’t even give the audience a chance to guess what was coming. But I’m hoping over the next few episodes, your expectations of who this guy is — what he wants, what he’s doing — are going to flip a few times. 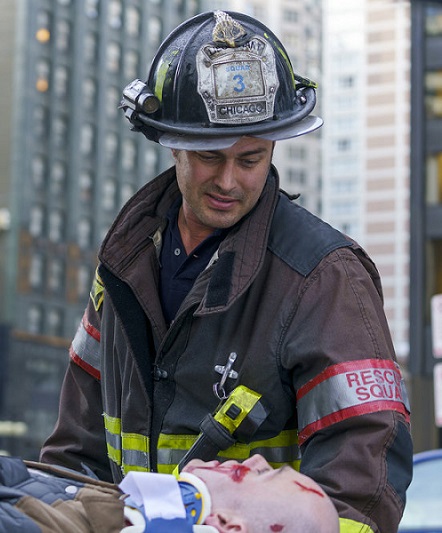 TVLINE | Is Severide having some type of existential crisis? Should we be worried about him?
It’s funny that you say that, because even in the script, when he goes into Casey’s office, in the action description, it says, “Severide’s being unusually introspective.” [Laughs] But yeah, he is going through a bit of an existential crisis of, “I’ve been womanizing, I’ve been carefree, I’ve been fairly unmoored for four and a half years,” and looking ahead of him, he’s got a future that’s not looking so good to him. So he wants to feel something again, or someone. So that’s what we’re setting up. That’s really going to be the thrust of the second half of the season.

TVLINE | What does this patient and helping her represent for him?
For him, it’s the antidote to having to drop victims off in the back of ambulances or at the hospital and never know what happens to them… So she represents to him… a purpose to his life, and she’s definitely going to factor in heavily into the second half of the season.

Fire fans, what did you think of the 100th episode? Grade it via the poll below, then hit the comments to back up your pick!