Once Upon a Time‘s midseason finale lifted the hood on the person that is fated to slay Emma, while the “return” of a familiar face wound up stranding two heroes in The Enchanted Forest (or a facsimile thereof) — until the show’s March 2017 return.

En route to Regina’s vault, hoping to divine intel about the sword that will be used to kill the Savior, Regina, Emma and Hook ran into the Evil Queen. When a scuffle ensued, Emma discovered that said sword can do damage to the Evil Queen — and at no cost to Regina! But when they next meet up with the sorcerer, she has gotten her mitts on Jasmine’s magic lamp, and summons the genie (aka Aladdin) to grant… Emma’s once-uttered wish, that she had never been the Savior. And Emma subsequently vanishes.

While David and Hook squabble over their next move, Regina confronts the Evil Queen, eventually deducing that she and her doppelgänger are”co-masters” of the genie. Regina thus wishes that she be sent to where Emma is, which is a “fake” version of The Enchanted Forest. There, Regina struggles to convince Emma, the Charmings et al of her non-evil identity, let alone Emma’s Savior destiny. Visiting her castle, she finds an imprisoned Rumplestiltskin, who suggests that she “queen it up” in order to force Emma’s hand, into remembering her Savior role. Alas, when a vamped-up Regina crashes Henry’s knighting ceremony (very much a la the series pilot’s royal wedding), Emma doesn’t swing into action but cower.

Even later, after Regina has abducted the Charmings, Emma shows up at the Evil Queen’s castle not to fight but meekly surrender the key to the kingdom — to which a disappointed Regina can only remark, “Seriously??” Nearly knighted Henry shows up, ready to slay the Evil Queen, but when he hurls his sword at her, Emma snaps out of it and “freezes” the action, sparing Regina as well as saving their son from making his first kill. 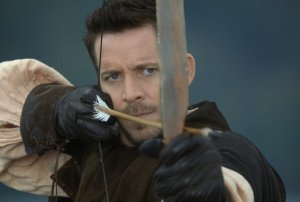 Regina and Emma rendezvous with Rumplestilstkin, to get the magic bean that will transport them back to Storybrooke. Yet just as they summon the portal, arrows fwip! by — shot by Robin Hood! Smitten by the unexpected “resurrection” of her soul mate, Regina ignores the swirling portal as well as Emma’s urging to hurry along, until their trip home vanishes, leaving them stuck in the fake TEF.

Elsewhere in the midseason finale:

* Rumple led Belle to discover that in the midst of spiriting away their newborn son, the Blue Fairy got mugged by the Black Fairy, who proceeded to take Gideon to “a place of immense dark power,” where time works differently and such. Meaning…? Meaning, when the cloaked figure from Emma’s vision of the future arrives in Storybrooke via a portal, he ultimately arrives at the pawn shop to reveal himself as grown, glowering Gideon.

* Oh, before stopping at Dad’s store, Gideon turned the Evil Queen into a caged cobra.

* After Charming pretty much pissed away the lamp’s third wish, he declined the offer to use it to try to end the sleeping spell cast upon him and Snow. Instead, he returns the lamp to Jasmine, who wishes that Aladdin take the two of them away to save Agrabah.

What did you think of Once‘s midseason finale?