Time to eat, Top Chef fans! To be honest, we’re just excited that TV’s best cooking competition is back, so we’ll take any flavor of it we can get. But the new season pitting eight new chefs against eight former cheftestants does add a little… spice, doesn’t it?

Some of the returning chefs — oh, let’s just call them “leftovers” — we’re happy to see again. (Hi, Brooke!) But others? Well, we just won’t mention the ones we could do without. (*coughcough*JohnTesar*coughcough*) 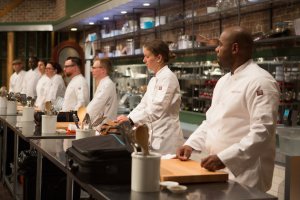 Set in the emerging food mecca of Charleston, South Carolina, Thursday’s season premiere kicks off with the newbies entering the Top Chef kitchen and rattling off their credentials. But they don’t know that the leftover cheftestants are watching them from the stew room. The veterans all seem to know each other and, of course, start sizing each other up immediately. “Mexikosher” chef Katsuji has the best one-liner, though: “Am I getting subtitles this year on Top Chef, or not?” (He is.)

John Tesar — you remember this know-it-all from Season 10 in Seattle, right? — makes the most waves when he arrives in the stew room. As Brooke aptly puts it, he’s like your stepdad, who “sometimes you’re excited to see, and sometimes you just roll your eyes at.” That’s even being a little generous, if you ask us.

But enough with the drama. Let’s get cooking!

LIVER LET DIE | The first quickfire challenge of the season is simple enough: Take a whole chicken and make a great dish (or dishes) in one hour. But as we know, simplicity can be the kiss of death on Top Chef. We take an instant liking to Alabama native Jim, who calls himself a Star Trek nerd. (One of us!) But he throws us for a loop when he plans to serve chicken livers with strawberries and ranch dressing. Um, what alien planet is that flavor combo from? 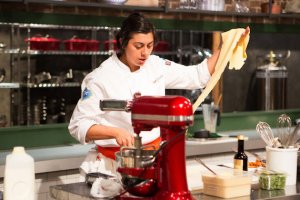 Italian chef Silvia impresses right out of the gate by whipping up some fresh tagliatelle pasta, so she’s an early favorite. But an in-the-weeds Annie laments, “I can’t serve Tom Colicchio raw chicken!” No… no, you cannot. And then during tasting, Annie gets further on Colicchio’s bad side by trying to tell him what a panzanella salad is. “I know what panzanella is,” he grumbles. Yeah, she’s not winning.

So who does win? Silvia’s pasta is indeed a finalist, but the winner of the season’s first challenge is… Jim! They liked his strawberry-flavored chicken livers, apparently. As for the bottom, Gerald and his smoked buttermilk-poached chicken are on the chopping block. He’ll have to cook for his life in a head-to-head sudden-death cook-off against the loser from the next group.

KISS MY GRITS | Now the eight leftover cheftestants sharpen their knives for their quickfire challenge. And judging them will be a new addition: MasterChef‘s Graham Elliot! Brooke is already feeling the pressure: “I’m instantly wondering why I did this again. Is it too late to turn back?” 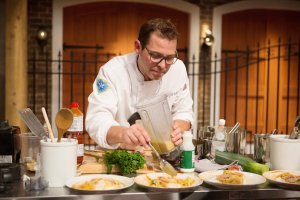 The veteran chefs are given 30 minutes to deliver their version of shrimp and grits. Brooke goes a little wacky, grinding up shrimp to make a coating for a Scotch egg. Katsuji, of course, uses way too many ingredients. And John shrugs off his bad reputation: “I’m a kinder, gentler John Tesar these days.” But one who still refers to himself in the third person, naturally.

The winner: Brooke’s shrimpy Scotch egg! And look who’s at the bottom: It’s John, and his kimchi-flavored shrimp. He gets defensive, sniffing, “I like my dish.” Of course he does! But he’s still going up against Gerald, with elimination on the line. Is there really any suspense here, though? John’s such a drama magnet, there’s no way the producers would let him go in the first week, is there? Please say there is.

OYSTERS ROCK A FELLA | As the newbies and leftovers mingle and settle into their new Charleston digs, John is already plotting how to defeat Gerald. Katsuji encourages him to play mind games with Gerald and “take him off his game.” (That Mexikosher devil!) But what does manage to throw Gerald off is the site of the cook-off: the Boone Hill cotton plantation. An African-American chef competing in a “sudden-death” challenge on an old slave plantation? Um… Bravo, you might’ve wanted to rethink that one.

John and Gerald’s challenge: to do an old-fashioned oyster roast. Gerald decides to go Thai-style, but handicaps himself when he only throws five oysters on the fire. He then has to scramble when some of the shells turn out to have (ew) tiny crabs inside. Meanwhile, John is doing a cream soup — and breaks out a bag of truffles he brought along as a secret weapon. Damn you, Tesar!

The judges, including old favorite Gail Simmons, taste both dishes, and seem equally happy with both. “How can you compare” the two, Padma asks during deliberations? Well, they do… and John wins. (Toldja.) That means Gerald is packing his knives and going home. John cackles to the rest of the group: “You’re not rid of me yet!” Sigh.

How did the Top Chef premiere taste to you? Not enough flavor? Or too salty? Play Padma and share your judgments in the comments.