Motherhood was a real — and devastating — whirlwind for Once Upon a Time‘s Belle, who after having her pregnancy magically accelerated and then giving birth to a son, tasked the Blue Fairy with taking wee Gideon far, far away, to elude his father Rumplestiltskin’s clutches.

Yet from the sound of it, Belle’s little boy is far from out of the woods, as the ABC series serves up its midseason finale this Sunday at 8/7c. Here, Emilie de Ravin weighs in on Belle’s sacrifice, the state of the “Rumbelle” relationship and a “scary” twist to come.

TVLINE | What is Belle’s mindset in the immediate wake of making that sacrifice, sending newborn Gideon far, far away, under Blue’s care?
Sadness, No. 1. It was amazing to play this episode, being a new mum myself. [The Aussie actress welcomed her first child in March.] All the thoughts that go through your head — your kid is life, you would die for your child in a heartbeat. The stakes were so high, and you have to do what no parent would want to do unless is really is the best thing for the child’s safety, health and happiness, to give them away. Making that decision, as heartbreaking as it was, was the strongest thing she has ever had to do in her life.

TVLINE | Will there be unexpected consequences? The logline for the midseason finale teases a “surprising danger” facing Belle and Rumple’s son.
When does this show ever not have any surprising consequences? [Laughs] Obviously, being the midseason finale, they’ve done an amazing job with, in my opinion, a lot of unexpected situations. Going into it, you’ve got Belle believing that Rumple is the one who spiked her tea, so she is in the mindset of him being the devil to her at this point. Their tumultuous relationship is at a peak. It’s a struggle, because if you look at and analyze everything that Rumple does — whether it’s motivated by his addiction to magic or not — it’s to protect Belle, to protect his children. You find out a little bit more about that this week, and yes, Belle and Gold are faced with probably one of the biggest surprises they’ve had in a long time.

TVLINE | Which is saying something! 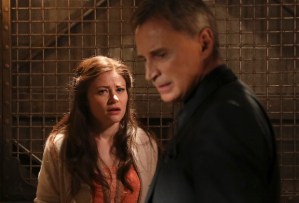 TVLINE | You talk about the to-and fro they’ve endured over the years as a couple…. Do you as an actress feel like you have a good grasp right now on what exactly their dynamic is, how exactly he comes up short for her? Is that something you’ve struggled with at times?
I did in the past, but this season, for me and for Bobby [Carlyle], they’re both being honest with themselves, for probably the first time. There’s no longer that, “Oh, I’m going to put a facade on to try and make you seem different — or worse for that matter — than you usually are.” The cards are on the table at this point. This is who I am, this is who you are — what are we doing about it? Are we together, are we not? What actually is the reality of this situation? And that’s been really nice and organic to play with.

TVLINE | I just feel like some of his words in recent episodes…. These two have become very blunt with each other, so I’m wondering if he has crossed a line, where he has lost Belle forever? Has he said too much?
We’ll have to see on that one. I think if everyone looks at their life, you have situations and people and events that sometime define a point where there’s no going back, where that was a turning point. Or, you look back and you think, “Oh, I never really knew that I could get through that, or that that could change. But Belle, right now, is not even actively thinking about their relationship. Her focus is solely on her child and therefore her own health and safety.

TVLINE | Her child who at times is played by a grown man. Is that funny for you, playing “mom” to Giles Matthey?
Oh, Giles is wonderful — a great actor and a lovely guy. He’s been awesome to work with. But it’s funny, because [Bobby and I] are like, “Oh, that’s what our son would look like!” But we had some tall relatives, apparently. “Grandpa Joe” must have been 6-foot-5! 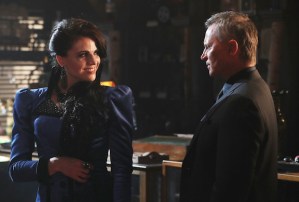 have any words with the Evil Queen about speeding up the pregnancy, flirting with her man, or any other bone to pick?
We’ll have to see on that one. Remember, at this point Belle is under the impression that she he had nothing to do with [accelerating the pregnancy]. So, that is to be revealed later on.

TVLINE | But ideally, you’d probably love to address that at some point. So many wrongs get visited upon Belle, such as when Regina controlled her with her heart without asking permission first….
Oh, as Emilie, I would be over there immediately! Emilie would be over there like, “What the…?!” [Laughs] There’s a wonderful backstory to Belle and Regina that I hope we get to explore a bit more this season. I love that relationship. The Regina/Evil Queen character has gone through a plethora of things this season, a lot of development there to put it plainly….  Yeah, they’ve gone through a lot in their past. There’s been a lot of redemption there, a lot of hurt, and a lot of reconciliation, too.

TVLINE | As we talk about Evil Queen versus Regina, I’m having flashbacks to that Belle’s other personality from seasons ago. What was her name…?
Oh, Lacey! Bobby and I were talking about that just the other day.

TVLINE | There’s your Season 7, playing dual roles!
I admire Lana [Parrilla] doing this, but my god it’s a lot of work! [Laughs] Lacey was fun, though, let’s bring her back for an episode. I’d be down with that!

TVLINE | What else can you say about the larger twist in the midseason finale. Something about an alternate reality…?
Oh, we’re always dealing with alternate realities, aren’t we?

TVLINE | There are stills of Jen, Ginny and Josh in their regal finery, on a green stage….
I kinda dont want to say anything about that, because that’s more fun to see play out. They look amazing, though, and it is pretty cool when you find out what that is about. Look, there are two really big twists that come in various shapes and forms — one of them will have people very excited and happy about, and the other, people will be scared and confused by.