It’s fall finale time for Jane the Virgin, which means no new episodes until January. (Can’t Rogelio release a Christmas album or something to help get us through this drought?) But Monday’s finale gave us plenty of plot twists to chew on during the long break… including a huge revelation for Rafael.

Jane’s baby daddy starts out the episode by objecting to Jane taking Mateo to church. It seems like just another co-parenting tiff for these two… until Rafael flashes back to a traumatic childhood memory in a church. Meanwhile, Michael’s investigation into Mutter turns up some stolen art from a convent, which leads to Rafael confessing: He knew about the stolen art, and lied to cover up his father’s involvement. Which just gives Jane another reason to be mad at him.

But the plot thickens when Rafael takes a tour of the convent, and the childhood memories start flowing again. (Plus, the nuns recognize him. Which is weird.) He sits down with a nun named Sister Constantine, who tells him the nuns were in on the stolen-art scam — and who hands him a mysterious envelope. Later, a shaken Rafael hands Jane the envelope, which contains a birth certificate. His birth certificate. Rafael was actually born in Italy… and he’s not a Solano!

On the bright side, at least he’s not related to the devious Mutter by blood. But does this mean he loses the Solano family fortune, and the Marbella along with it? Now this long wait for new episodes is even more agonizing.

Let’s run through the other big plotlines from Jane‘s fall finale: 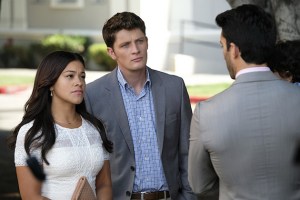 JANE GETS HITCH(COCK)ED | It’s always great when this show plays around with genres and filmmaking styles, so it’s fun to see Jane getting into Alfred Hitchcock movies this week in an effort to add suspense to her writing. That means we get visual references to Vertigo and The Birds, and a quick rundown on Hitch’s “bomb under the table” theory of storytelling. (That bomb went off when Raf opened the envelope, didn’t it?)

But Jane’s main conflict this week is with her spiritual faith. Alba guilts her into going back to church and taking Mateo with her, but we discover why Jane’s been avoiding church when she talks with a kindly nun at the convent. Fighting back tears, she says Michael’s brush with death really shook her faith: “I felt mad at God… why would he do that?” The nun reassures her that her doubts are perfectly natural, though, so expect to see Mateo squirming during Sunday Mass a lot more in the weeks to come.

CATALINA LYIN’ | Jane’s glamorous cousin Catalina is already grating on her and Michael’s nerves, keeping them up all night — and snacking on Mateo’s teething biscuits! But Jane starts to suspect she’s a liar, too, when Catalina ditches a charity gala, and Jane snoops around to find she’s not even on the gala guest list. Jane even spots a bag stuffed full of cash and jewels… but Catalina explains the jewels are family heirlooms. Or are they? The last we see of Catalina, she’s kissing a silver-haired mystery man who accuses her of snatching those jewels from him. Do we have another Sin Rostro in training here? 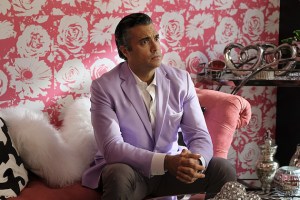 RO’S BABY FEVER | After all that heavy stuff, we need some comic relief, and Rogelio (as always) provides with a new romantic venture. He goes to celebrity matchmaker Darci Factor to find him a woman who’ll have his baby, but he rejects the likes of Denise Richards and Carmen Electra. (Like there aren’t millions of fans out there who’d gladly carry the heir to the De La Vega throne?) His sincere desire for another child impresses Darci, though, and she ultimately sets him up with… herself! Nothing romantic; just “two aging narcissists” (Darci’s words, not ours) teaming up to raise a kid. But we have a feeling this arrangement may unravel as soon as Ro gets distracted by a new social-media app or something.

What does Rafael’s revelation mean for him and Jane? Hit the comments, Jane fans, and start theorizing.