We’ve got questions, and you’ve (maybe) got answers! With another week of TV gone by, we’re lobbing queries left and right about shows including The Last Man on Earth, Timeless, This Is Us and NCIS!

1 | Isn’t it funny how the buildings MacGyver inevitably gets trapped in not only have potentially volatile cleaning supplies handy, but bountiful, freshly stocked amounts of them?

2 | With Jason Sudeikis on hand for Kristen Wiig’s Saturday Night Live hosting, how did we not get a “Two A-Holes” sketch? (And don’t get us started on Wiig’s absence from the Target commercial parody.)

3 | Even if The Walking Dead‘s Saviors are too afraid of Negan to revolt against him, why on Earth haven’t the denizens of The Hilltop overthrown useless sleazebag Gregory? And how much better is Maggie doing than you would be if you’d only recently watched your spouse get their head bashed in?

4 | Was AMAs cohost Gigi Hadid’s “Melania Trump” impression as offensive as some have decried, or simply random/unfunny?

5 | On NCIS: Los Angeles, what moved you more: Kensi and Deeks’ weaving of fingers, or Callen learning he had a half-sister/has a niece?

6 | The Last Man on Earth’s Lewis is totally gonna master the flight simulator, then eventually fly the others with him to Tokyo to find Mark and other possible survivors, right? And one of them is going to be an OBGYN capable of delivering Carol and Erica’s babies? 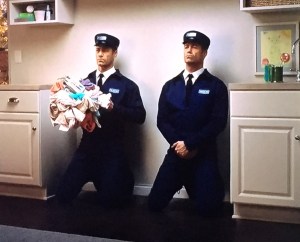 7 | Would you have rather had Supergirl postpone the Alex/Maggie make-up scene, and instead give Kara’s sis those minutes to better process her father’s confirmed “resurrection?”

9 | The moment that Lucifer opened his mouth to relate the first tale of the Lux location’s storied past, did you guess that a “historical landmark” designation would save it from being bulldozed?

10 | Did Jane the Virgin‘s meta jokes about product placement make all those shots of cereal any easier to, um, swallow? Cuter couple moment: Xo and Rogelio’s dance-off, or Jane and Michael’s Bruno Mars karaoke duet? Finally, is it about time that Rafael got a proper love interest, not one who is potentially shady/full of secrets?

11 | As clever as Timeless‘ Rufus is, wasn’t he taking a small gamble by messaging a Star Wars reference to a Star Trek fan? 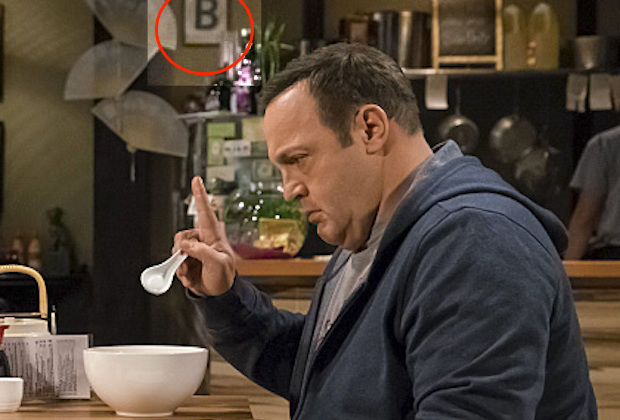 12 | Kevin Can Wait viewer(s), did you notice that Mr. Chu’s restaurant only got a “B” grade from the Department of Health? Why would Kevin go into business with a man whose restaurant isn’t clean enough to earn an “A”? And why would Donna choose to eat there?

13 | How long before CBS signs James Corden and Anna Kendrick to star in its first live musical, a la Hairspray Live? And is Corden, who has already hosted the Tonys and will soon preside over the Grammys, a shoo-in to host CBS’ broadcast of the 2017 Emmys?

14 | Shouldn’t a longtime Team Flash member — versus newbie H.R. — have had the thought to employ a Captain Cold countermeasure against Killer Frost?

15 | If This Is Us‘ English actress Olivia celebrated Thanksgiving, does that mean she grew up in America? And when the truth about Rebecca’s secret finally came out, why did only the kids have to leave that super-uncomfortable dinner table?

16 | Why would Chicago Fire‘s Sylvie ever think it was OK to talk about Antonio’s touch with his sister, Gabby?

17 | NCIS fans, were you relieved, or admittedly a bit disappointed, that Bishop is dating neither Torres nor Reeves?

18 | On Rectify, which marital dissolution is more painful to watch: Ted Jr. and Tawney, or Ted Sr. and the increasingly disenfranchised Janet?

19 | As they marched on (and kept marching on) by, did it become obvious that Ollie and Stanley actually made a helluva lot more than 100 six-foot-tall wooden soldiers?