This is your last chance to hit the nearest exit! OK, we warned ya!

With those four little words, Gilmore Girls got turned on its ear — and the mother-daughter duo of Lorelai and Rory Gilmore came full-circle. (FYI: Our recaps of “Winter,” “Spring,” “Summer,” and “Fall” are now live.)

Sitting in the iconic Stars Hollow gazebo in the final moments of “Fall,” the two drank Champagne and talked about growing old together. Lorelai teased Rory for being in love with Pee-Wee Herman as a kid, and Rory got a break-up text from her forgettable boyfriend Paul. (“Who?”) But Rory seemed distracted, and Lorelai asked, “What’s going on in there?” Rory said wistfully, “I want to remember it all. Every detail.” Then she dropped the P-bomb on her unsuspecting mother. We saw Lorelai’s shocked face, then… Bam! Credits.

Creator Amy Sherman-Palladino has teased us for years that the ending she dreamed up for Gilmore Girls (before she left the show prior to its final CW season) consisted of four words of dialogue. And fans have furiously speculated for nearly a decade about what those words could possibly be. But in retrospect… it’s kind of obvious, isn’t it? 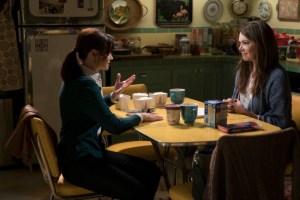 Of course the final four words would be between Lorelai and Rory — the core relationship that the entire series was built around. And of course it makes sense that, since the show began with a 32-year-old Lorelai and her 16-year-old daughter Rory, it would end with a now 32-year-old Rory having a child of her own, continuing the circle of life. (And making Emily a great-grandmother!)

We are still left with a few lingering questions: Like, who’s the father? (It’s easy to assume Logan, but they broke up at the end of “Summer”… and Jess was staring pretty longingly at Rory through the window at the end there.) And does this mean Rory will quit jet-setting and settle down in Stars Hollow, where her kid can nibble on waffles at Luke’s Diner and annoy Michel at the Dragonfly?

All in all, though, the last four words were a lovely summation of Lorelai and Rory’s unbreakable bond — and a tantalizing hint of all the stories still left to tell.

But what did you think of the last four words? Vote in the poll below, then hit the comments to share your thoughts. (And yes, you can use more than four words.)