On Tuesday’s Chicago Fire (NBC, 10/9c), the arrival of Gabby’s parents – and their huge news – will throw the paramedic for a loop, especially when it comes to her feelings on commitment.

Mom and dad (played by Hold the Door‘s Fulvia Vergel and The River‘s Daniel Zacapa) “get up at their big anniversary dinner and announce they’re getting divorced,” executive producer Michael Brandt reveals. “So that throws everything into a tailspin.”

“[Gabby is] spinning out because she doesn’t know what to think about marriage anymore,” the EP continues. “She thought that [her parents] had this perfect marriage for all these years.”

Shaken by the very unexpected declaration, Gabby — who has yet to tie the knot with beau Casey — “definitely starts to reassess” her stance on holy matrimony, star Monica Raymund previews. 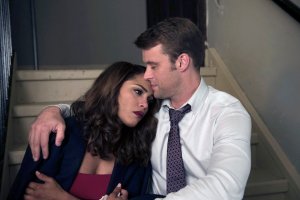 “No matter how young or old you are, when you hear your parents are splitting, it changes everything,” the actress says. “It reevaluates everything for you … and maybe your perspective changes on what a family is, what a family should be. What does that mean if the bonds of marriage can be broken so easily? Should you even get married?”

Although the rents’ visit could spell trouble for “Dawsey,” leading man Jesse Spencer hints at a spirited episode. “The Dawson family is hysterical,” the actor teases. “Let’s just say they’re very high-energy — family feuds and all that going on.”

Casey also shares some “really nice” scenes with his possible future in-laws, who view the firefighter as a “golden child,” Spencer says.

“The actors who play her parents were fantastic,” he adds. “It was like its own show straight away. I was like, ‘This is brilliant.’ I like doing things like that because it’s such a departure from what we normally do. It’s almost like doing a crossover. I was doing a crossover onto The Dawsons!”