As if The Flash‘s Barry Allen didn’t already have enough to deal with — between the enigmatic Doctor Alchemy nudging people toward metahuman destinies and now the arrival of “speed god” Savitar — it looks like he is poised to get “frostbitten” by colleague Caitlin Snow.

TVLINE | We’ve been told that Caitlin will only be consumed by her powers if she keeps using them. Why is not using them so difficult for her?
I think Caitlin is really struggling with eaerning how to navigate her powers. At this point I don’t think she’s quite as finessed as she would like to be, or as much as the rest of Team Flash would like her to be, for their own safety.

TVLINE | Plus, the show keeps finding reasons her to have to bust them out.
You never know! 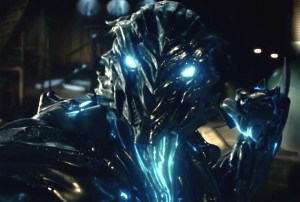 has dealt with several sinister speedsters over the years. What unique threat does Savitar present? Other then being pointy.
He does look very pointy! Savitar is scary, he’s terrifying, and he is so fast. There’s so much unknown about him, and not all of Team Flash can deal with him the same way — if that makes sense.

TVLINE | He’s also a villain that you as the cast don’t get to physically interact with, I imagine, since he’s CG (computer-generated).
Oftentimes, yes. He is currently all-CG. But I do think that sometimes, just in general, the unknown is scarier. Sometimes the things in your imagination are so much scarier than they end up being in person. That’s not necessarily true with Savitar, but….

TVLINE | Right — we’ve only known speedsters as humanoids in rubber suits, but then this guy shows up and he’s nothing like we have seen before.
And I don’t know 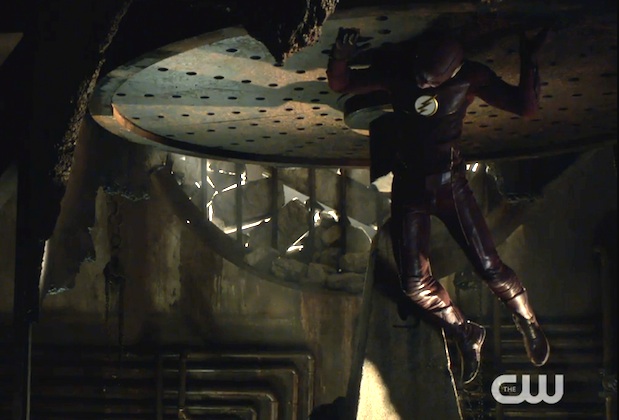 if it was clear, but not everyone sees him in the same way…. [See screen grab at right]

TVLINE | Interesting….. You tweeted out a clip where Caitlin is really ripping into Barry. What’s going on there?
Caitlin is having a rough time! [Laughs] Episodes 6 and 7 technically take place over one night, and I keep joking that that was probably one of the worst nights of Caitlin’s life. She wants to help, but she doesn’t have control of her powers, because they’re so new to her. And when this dark side to her comes out, she’s pretty angry with Barry because he’s a bit of catalyst for all of this. Had Barry not gone back in time and done Flashpoint, she might not have these powers.

TVLINE | The synopsis says that Caitlin “goes on a rampage looking for Dr. Alchemy.” What’s her beef with him?
I don’t know that she has a “beef” with Alchemy; I think she is looking to him for answers. Alchemy is still sort of this unknown to Team Flash, but he seems to have some ability to manipulate powers or change metahumans, and Caitlin wants to know more. 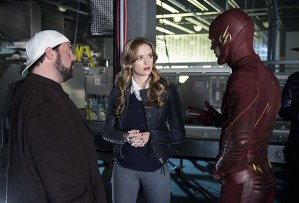 , what is the special something that Kevin Smith brings?
Kevin is so passionate and so knowledgeable, it’s his enthusiasm that really permeates the set. Every day he is so excited to be there, and that childlike wonder of “Oh my gosh, we are all living our dream!” is contagious, and it makes such a big difference. I wish we could have him around all the time! He has a lot of trust in the actors, that we’ve done our homework and are prepared. One thing that he in particular has is an incredible mastery of storytelling and this ability to finesse the script to help tell the story the best way possible. He also knows what he’s going to use, what he is going to cut to, so he doesn’t waste time…. He’s specific and clear about what he wants.

TVLINE | I speculated in my column last week that Caitlin might actually end up using her powers for good. That maybe in Cisco’s vision, Vibe is the villain and she is trying to fend him off. Is there a scenario where the future brings us not Killer Frost but “Kickass Frost”?
I hope so. I think Caitlin has a long way to go until she gets to that point, though. At this point I see her powers as like a drug. It’s this thing she’s addicted to and it feels incredible, even though it’s wrong and it hurts people.

TVLINE | Will we see her power manifest itself in any new ways? There’s been a lot of frosting things up, icing things over…. Anything else cool to watch for?
“Pun intended”? Sorry, I can’t help that. [Laughs]  She’s definitely willing to use whatever she has in her arsenal to get what she wants — and in one scene in particular, she’s got something special up her sleeve for Barry, let’s just say that!