“The truth will set you free” — or so NCIS‘ Agent Ellie Bishop hoped, as she came clean to Gibbs in this Tuesday’s episode about her relationship with a professional colleague.

On the heels of her three visiting brothers grilling pretty much every warm male body in Ellie’s orbit — from McGee to Torres and Reeves — Bishop returned from a sobering fact-finding mission at Gitmo to ‘fess up to the author of Rule 12, which states: “Don’t Date Coworkers.”

“Listen, Gibbs, I don’t want to lie to you anymore,” she started, finding him alone at the office late at night. “I wanted to tell you earlier, but i didn’t know how to say it, and then more time passed…. I broke Rule 12.

“At first we were just good friends, and then a few months ago it turned into something more,” her confession continued. “And I won’t apologize for it — not because that would break another rule [No. 6], but Gibbs, I like him. A lot.”

Gibbs’ plain response to the reveal: “Took you long enough.” To which even Bishop had to wonder aloud, “That’s it…?”

“Happy Thanksgiving, Bishop,” is all that Gibbs added, bidding her adieu. 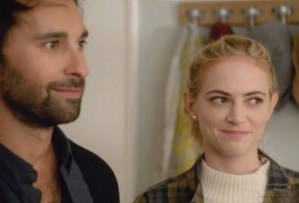 then continued on with her own Thanksgiving, back at her apartment with brothers Robbie, George and John, to whom she introduced the man in her life: Qasim Naasir, whom she (and we) first met in Season 12’s “Lost in Translation” episode, and who this week helped with some Pashto translation and accompanied her to Gitmo.

“Thank God,” George said upon laying eyes on the mystery beau, whom the brothers then properly welcomed into the fold. “We thought it was Gibbs!”

What did you think of the episode “Enemy Combatant”?