If I had the ability to use emojis in my recap of The Voice‘s Top 11 performance episode, I’d kick things off with police siren, anxious face, megaphone, alarm clock and “scream face.”

All of which would be to alert the Voice-aloonie Nation that there are only three performance episodes remaining until we crown a successor to Alisan Porter.

But then again, if The Bachelor can put a ring on it after a handful of drunken nine-on-one dates, a helicopter ride and a night in the “fantasy suite,” perhaps Blake, Adam, Miley, Alicia & Co. are operating at a pace that’s downright luxurious. 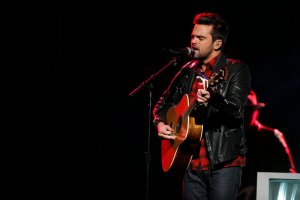 The pressure of The Voice‘s rapidly emptying hourglass, however, seemed to get to most of the remaining artists this week, resulting in an installment that — despite the coaches’ over-eagerness to offer up standing ovations — proved surprisingly below par.

Let’s jump right into reviews/letter grades for the week’s 11 performances.

Ali Caldwell, “9 to 5” — Grade: C- | Look, Ali has only herself to blame for botching the lyrics to the Dolly Parton jam most likely to be covered by drunken corporate comrades on karaoke night. But Miley’s decision to shove the super-talented R&B chanteuse into a novelty country corner — while clad in a flapper dress from the back of Tina Turner’s closet – made as much sense as awarding the Olympic winter games to Dallas, Tex. If Ali winds up as roadkill on The Voice highway come Tuesday, my conspiratorial side will always wonder if she got steamrolled by producers in an effort to clear a path to victory for Wé. But in an effort to thwart such a doomsday scenario, I’ll be voting for the woman who slayed Leonard Cohen’s “Did I Ever Love You” last Monday — even if she followed it up with her personal worst by far.

Sundance Head, “No One” — Grade: B- | Let’s give credit where it’s due: By infusing Alicia Keys’ lush, romantic ballad with country-soul elements, Sundance took the week’s biggest creative swing, and it paid off — at least from a “dude knows his music” standpoint. Trouble was, Sundance’s vocal felt tight and tentative — not to mention far too reliant on the aggressive background vocalists — leaving me more impressed by the power of his ear than what actually came out of his mouth.

Aaron Gibson, “Hurt” — Grade: D+ | Aaron’s got a deep, rumbling voice, and yet the verses of “Hurt” proved too low and intricate for him to consistently stay in tune. More troubling, though, was Aaron’s inability to bring any shade besides guttural growling to his Nine Inch Nails cover — resulting in a performance that wasn’t so much haunting as it was demonically possessed.

Courtney Harrell, “What I Did for Love” — Grade: C+ | Courtney definitely improved on last week’s disastrous Aerosmith cover, but there were still as many sharps in her vocal as the back of Hellraiser’s head. Combined with a Miss America-esque gown and delivery, Courtney did nothing to make a case for her long-term Voice fortunes.

Josh Gallagher, “Drunk on Your Love” — Grade: D+ | I know Josh was aiming to “change up the melody” of Brett Eldredge’s boppy country ditty, but those wretched riffs over the final chorus could not have been what he intended, could they? As Josh aimlessly strolled the stage and tried to show “personality,” he dropped hinky notes like popcorn on a movie-theater floor, and if there’s any justice in the Voice universe, it’ll be him (and not Ali) getting swept aside come Tuesday night. 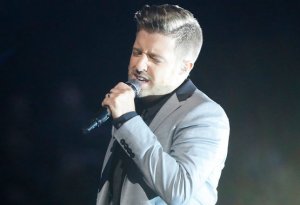 Billy Gilman, “All I Ask” — Grade: B+ | I didn’t disagree with Adam’s pre- and post-performance comments that Billy really needed to connect emotionally — and not just dazzle technically — in order to have a shot at the Season 11 crown, but I sure was surprised to hear the Maroon 5 frontman spin a narrative for his No. 1 artist other than “Oh Em Gee, you are perfect in every way.” The superior sound mix Billy received — would that Ali and Wé were so lucky! — showcased the ache and longing in Billy’s delivery, but it also exposed a few hinky transitions tht kept him from fully making it to the top of Mt. Adele.

Christian Cuevas, “Rosanna” — Grade: B | I know Alicia wanted to make Toto’s ’80s anthem sound less dated by removing the horns and pumping up the rhythmic elements, but a better way around that issue might have been not choosing Toto’s ’80s anthem in the first place? Nevertheless, despite swallowing more than a few notes on the verses, Christian gamely ripped into the ear-wormy chorus, at times making the ditty sound so of the moment, I wondered if maybe we were witnessing a crossover episode with NBC’s time-machine-focused drama Timeless.

Austin Allsup, “Turn the Page” — Grade: A- | I always love it when a Voice artist ignores the producers’ “chosen contestants” narrative/pecking order by hitting an unexpected home run — and that’s exactly what Austin did with a vocal so emotionally raw and real it made most of his competitors come off like wooden Pinocchios by comparison. Granted, as a family man whose gigging often separates him from his family, the lyrics of Bob Seger’s rock classic couldn’t have been more apt, but in this case, Austin was perhaps doing more than “playing the star again,” and rather turning into one before our very eyes.

Darby Walker, “You Don’t Own Me” — Grade: C- | I know a lot of folks in the comments section find my C- grade too generous — and perhaps you’re right. There were, after all, moments where Darby’s vocal got as out of control as a blindfolded chimpanzee riding a moped down the freeway. But I also found the teenager’s delivery far less affected and cloying than in previous weeks — punctuated by real bursts of defiance that, mercifully, distracted from her Muppet-fur coat and tragic peace-sign sequined pants.

Brendan Fletcher, “The River” — Grade: B | Brendan benefitted from an incredibly smart song choice — one we’ve never heard, and probably never expected to hear on The Voice stage — that he delivered with emotional earnestness and vocal competence. To be completely honest, I wished he’d done a little more to take ownership of the Bruce Springsteen anthem, to aim a little higher than note-for-note homage, but on a night where there were misses aplenty, Brendan’s latest effort definitely falls into the “hit” zone. 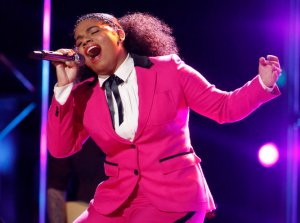 Wé McDonald, “Love on the Brain” — Grade: A- | Wé’s gotten plenty of hype this season, and save for a misstep in the Live Playoffs, she keeps on living up to it. The sound mix on “Love on the Brain” kept creeping up like an Orca and attempting to swallow the affable teenager’s vocal, but she persevered with her supple lower register, a sense of joy and abandon on the choruses and a rhythmic dexterity that I suspect would’ve had Riri bopping her head with delight.

Should Be Bottom 2: Aaron, Josh
Will Be Bottom 2 (without having checked out iTunes charts): Ali, Aaron

Who do you think ruled The Voice Top 11 performance night? Vote for your faves in our poll below, then expand on your thoughts in the comments!