If you’re among those who’d been clamoring for more Lucifer/Chloe interaction in Season 2 of the Fox drama, recent episodes — including this week’s — certainly delivered.

At least up until that happened. (And, even worse, with that seemed poised to happen!)

To backtrack a bit….

In one of the episode title’s multiple interpretations, this hour found Lucifer facing eviction, when the real estate tycoon with whom he made a lipstick-on-thong deal to lease Lux turned up dead. Was this a ploy by Mum, to deprive Lucifer of the new home he’d grown so attached to? Er, not yet. Charlotte, though, would latch onto the idea of, if not collapsing Lux itself (via the bomber she took on as a client), attacking a smaller but just as impactful target.

Helping Mum lock onto that target was a combo of Dr. Linda (somewhat enamored/fascinated with “God’s wife”) and Dan (whom Charlotte bedded), who separately but together led her to realize how close Lucifer and Chloe had become. 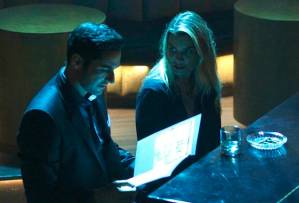 forming said plan, Chloe did her best to safeguard Lucifer’s home at Lux — first by waving off some fellow cops who came to shut down his “sit-in” party, after which Lucifer slowly but surely thawed the detective enough to share in some fun dancing. But the bigger connection came later, when Chloe revealed to a despondent Lucifer that, thanks to the tales he had shared of Rita Hayworth and Prohibition Era tunnels, Lux qualified for historical preservation, and thus wouldn’t be bulldozed in favor of a Cinnabun.

Lucifer was so very and sincerely appreciative, he beseeched Chloe to join him for a fine dinner courtesy of of an elite chef who owed him a favor. And sure enough, Chloe showed up at the restaurant, 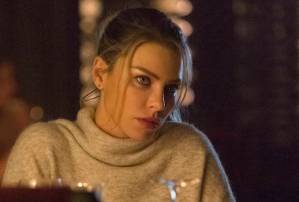 looking atypically soft and cozy and approachable. Luci, though, was a no-show, having just been spooked by Dr. Linda’s suggestion that he had already found what he came looking for on Earth, in Chloe.

Getting merely blown off might be the least of Chloe’s woes for the night, however, seeing as Charlotte has attached a bomb beneath her car, and is standing in the shadows outside the restaurant ready to flip the trigger….

What did you think of “Homewrecker,” and how might Chloe avoid blowing up?