There will be no mistaking Arrow‘s milestone 100th episode — airing Nov. 30, in the middle of the CW series’ crossover event with Supergirl, The Flash and Legends of Tomorrow — for any of the 99 that came before it.

“It is such a radical departure from anything that we have ever done on the show,” star Stephen Amell attested during TVLine’s visit to the show’s Vancouver set. “We utilize the fantastical elements that we bring in on The Flash and carry through to Legends of Tomorrow with the present-day storyline to create something… that is not a flashback [or] a flash-forward. It’s something else entirely.” 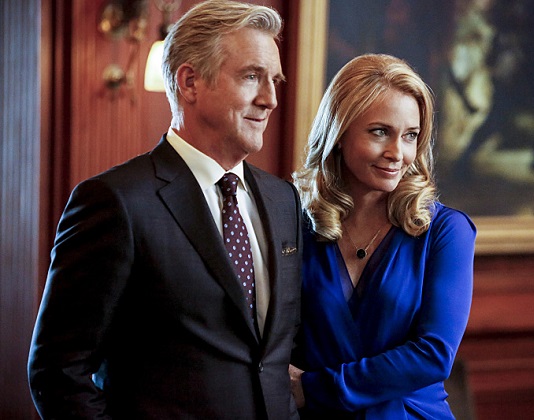 As detailed in the official description, “Oliver wakes up to a life where he never got on The Queen’s Gambit.” Robert and Moira Queen (guest stars Jamey Sheridan and Susanna Thompson) are alive and well, while Oliver’s wedding to Laurel (Katie Cassidy) is imminent. “Everything seems perfect, but Oliver starts to notice small imperfections that make him question this new reality.”

In the process, Oliver will finally get a sense of closure with his dearly departed loved ones.

“There [is] a very therapeutic moment for my character towards the end [of the Arrow episode] where I get to say goodbye to people that I never got the chance to say goodbye to,” Amell reveals.

That exchange is probably responsible for this rave review from executive producer Marc Guggenheim: “There’s one moment… that I think is probably Stephen’s finest performance to date. This one scene, that really has two moments within the one scene, will break your heart. It will take your heart, pull it out and stomp it on the floor. It’s very, very affecting. It’s all on Stephen’s back. It’s incredible.”

Arrow fans, what are you most looking forward to seeing in the 100th episode?