Too bad Alexandria lost its bazooka. Now that Carl is short one eye, his aim ain’t what it used to be, meaning that the revenge plot he hatched against Negan in this week’s episode of The Walking Dead wasn’t just risky, it was downright suicidal. Still, you had to give the kid credit for being the ballsy antithesis of Gregory, who, in his interactions with Maggie and Sasha, proved to be such a cowardly liar that it was actually a perverse treat to see him humiliated by the Saviors. What did they make The Hilltop’s leader do? Read on…

‘IT FEELS LIKE EVERYTHING IS WRONG’ | As “Go Getters” began, Maggie awakened at The Hilltop and was informed by Dr. Carson that, although there had been a separation of the placenta from the uterus, the baby was fine. But she should stay at the colony until giving birth, just in case she needed medical attention stat. Afterward, Sasha showed the mom-to-be where her husband and Abraham were buried, and returned Hershel’s watch, which had been in Glenn’s pocket. “All Abraham had was a cigar,” Sasha noted before her tears welled up anew. Happening upon them, Jesus explained that he’d left Maggie blue flowers at her bedside, because he’d heard they inspire “strength and calming.” And the green ones he brought for the graves? “Release.” 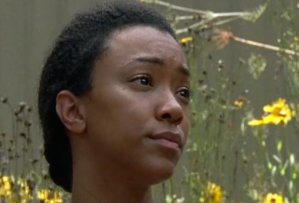 Just then, Gregory came huffing up, pissed that Maggie & Co. had told him they had gotten rid of all of the Saviors when — as if by then the widow wasn’t painfully aware — they had not. Upon ascertaining that Negan hadn’t learned about the deal that The Hilltop had made with Alexandria, Gregory — making an entirely accurate D-baggy impression on Sasha — told the mother-to-be that, doctors orders be damned, she had to skedaddle back to her own people. Jesus tried to intervene on behalf of Maggie but was shot down. “If they leave,” Gregory argued, “we have plausible deniability” that The Hilltop didn’t collude with Alexandria. In the end, Jesus was only able to get Maggie and Sasha an overnight extension. After that, he’d escort them home himself.

‘WHAT DO YOU WANT THIS PLACE TO BE?’ | Back in Alexandria, Carl balked at the idea of going on a supply run with his dad to obtain goods to hand over to the Saviors when next they came calling. Michonne wasn’t going, either, and before Rick left, she turned his kiss on her cheek into a much more meaningful and intimate one. When Carl asked why she had stayed behind, she explained, to his chagrin, that she was trying to figure out how they were going to make this horrible situation work. Shortly, Carl discovered Enid sneaking out to walk to The Hilltop and see Maggie but didn’t volunteer to accompany her. “I’m not saving you anymore,” he said. 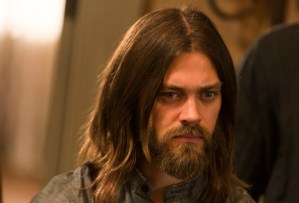 Meanwhile, at The Hilltop, Sasha suggested to Jesus that perhaps he was better suited to Gregory’s job than Gregory was. Alas, neither could Jesus leave, since the people there needed him, nor could he stage a coup. “It’s not me, I’m not a leader,” he insisted. Determined to find a way for Maggie to stay, Sasha floated the idea of leaving herself and scavenging for The Hilltop to pay her friend’s way. Finally, she became frustrated with Jesus’ constant uncertainty. “I just try to help,” he offered. “Maybe you gotta do more,” she replied. At that, he handed her Abraham’s necklace and offered his condolences, noting that the ill-fated hulk had been the rare individual who could say things that made you smile and wince simultaneously.

‘YOU DO THINGS FOR THE ONES YOU LOVE… LOVED’ | Bicycling to The Hilltop, Enid, as will happen in a zombie-filled world, was approached by a walker. But, before it could do her any harm, it was hit by a car. Repeatedly. Its driver? Carl. “What are you doing here?” she asked. “Felt like a drive,” Joe Cool responded. That night at The Hilltop, Maggie and Sasha were awakened by dramatic music coming from a car outside, and discovered the colony’s gates open and fires burning all over the place — clearly, a greeting from the Saviors. As walkers began lumbering in, Maggie instructed Jesus and some others to shut the gates and help protect Sasha as she tried to shut off the music. Unfortunately, the car was sealed tight. While she and Jesus battled walkers, Maggie rolled over more of the undead with a farm tractor, then drove right over the car, at last killing the sound.

Off Maggie’s act of heroism, Jesus put his foot down with Gregory about her and Sasha, only to have The Hilltop’s sleazy leader taunt that, if the younger man wanted to be in charge, he could just “say the word. The broken gate… Saviors… the people… All of this can be yours” — if he stuck around for more than five minutes. Once they were joined by Maggie and Sasha, Gregory told them they could take some rhubarb preserves as a thank-you for last night. But if Sasha wanted to get him to accept her offer to leave if Maggie could stay behind, they’d have to discuss it — nudge-nudge, wink-wink — one on one. Just then, the Saviors came rolling in, so Gregory sent the women into hiding and downed a shot of courage before feigning ignorance to Simon about Rick’s attack on Negan’s outpost.

‘FOR NOW, I’M YOUR NEGAN’ | You’d think Gregory would be better at playing dumb. But no. He told Simon that, after the Saviors’ stunt last night, “Message received.” Naturally, that led to Simon asking, “What was the message?” (Cue Gregory stammering.) Turned out, the Saviors had just been reminding The Hilltop of the service they provided, only to Simon’s amazement, The Hilltop had dispatched the walkers themselves. When Gregory suggested that his people must have picked up some skills from Simon’s associates, the Savior noted that Negan’s previous reps had to have gone soft and were now “very, very dead.” On the plus side, their killers (Rick & Co.) had begun to work for Negan and were “real go-getters.” Also, Simon had been tasked with being Negan’s new rep at The Hilltop. That being the case, “any hitches in the giddy-up [he] should be aware of?” Yes, in fact, Gregory said. But, rather than cop to his collusion with Alexandria — or sell out Sasha and Maggie — he revealed a case of Scotch. Still, Simon and his men took half of everything in the colony and insisted that Gregory kneel before his Negan stand-in.

Hoofing it to The Hilltop with Enid, Carl explained that he wasn’t sorry he’d seen Glenn and Abraham’s deaths, because it meant, when he got the chance to kill Negan, he wouldn’t have a choice. Enid would take out the Saviors’ leader, too, if she could. Further along the road, Carl found a backpack containing not one but two pairs of skates, allowing him and Enid to enjoy the kind of roller-rink date that was highly unlikely post-apocalypse. They even got to hold hands and smile (!) for a change. When they arrived at The Hilltop, the Saviors were still there but, Carl could tell, not Negan himself. Realizing that Carl hadn’t been “out for a drive” but hoping to kill Negan, Enid asked how he’d get away even if he succeeded. Though it wouldn’t matter at that point to Carl, it would to her, she said. And, after she asked him not to go, he kissed her forehead, then they kissed for real. (Nice throwback to Rick and Michonne’s kisses at the top of the hour.) Still, he was determined to go after Negan.

‘WE’RE ALL GONNA BE ONE BIG HAPPY DYSFUNCTIONAL FAMILY’ | Inside Barrington House, Gregory was livid because — d-bag that he is — he hadn’t intended to give away his Scotch, he’d intended to find Maggie and Sasha in that closet, where he’d told Jesus to stash them. At last, Jesus stood up to The Hilltop’s leader, threatening to expose his pact with Alexandria if he didn’t let Maggie and Sasha stay. “So you’re gonna be in charge now?” Gregory marveled. “No,” Jesus replied, “it’s just that you won’t be.” Coward that he is, Gregory caved immediately, and even called his interaction with the Saviors “progress.” But when he tried to lecture Maggie on how “reasonable” the Saviors could be, she hauled off and slugged him, then informed him that this was her home now, and he’d better get used to calling her by her name, “not Marsha, not dear, not honey — Maggie. Maggie Rhee.” 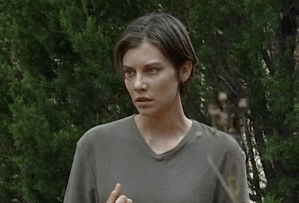 Later, Jesus told Maggie and Sasha that, when he’d first arrived at The Hilltop, Gregory was already in charge. He’d assumed at the time that the people chose him for a reason. Now? Not so much. Still, he couldn’t imagine anyone else in Gregory’s place… or he couldn’t until now. “Who?” Maggie asked. Rather than reply, “You — duh!” Jesus said they’d discuss it sometime. He also promised to make it up to them for not talking to Gregory sooner about them staying. If he really wanted to make it up to them, Sasha said, could he find out where Negan lives? Since one of the Saviors’ trucks was headed exactly there, yup. Sure, he could. But he wasn’t crazy about her idea of telling her but keeping it from Maggie. Nearby, Maggie discovered Enid at what she thought was Glenn’s grave (but was actually Abraham’s) with her green balloons. Maggie wasn’t OK, she admitted. “But I will be.” Over dinner with Enid and Sasha, Maggie said she’d decided not to use her dad’s pocket watch to mark Glenn’s grave but to give it instead to her husband’s young friend. “We don’t need anything to remember him by,” the widow noted. “We have us.” As the episode drew to a close, Sasha smoked Abraham’s cigar as she sharpened a blade, and Jesus snuck into the truck headed for Negan, only to discover Carl already hiding there.

So, what did you think of “Go Getters”? And is it possible that Gregory is even more awful than Negan? Hit the comments.