During her seven seasons on Saturday Night Live, Kristen Wiig crafted a series of unforgettable characters you either loved or hated. And depending on how you felt about the likes of, say, Lawrence Welk Show performer Dooneese or the #SorryNotSorry Gilly, there was cause for concern that her second stint as host would play out like a “greatest hits” compilation.

Surprisingly enough, the Bridesmaid-turned-Ghostbuster rarely had to rely on her divisive repertoire, and instead was used in a manner that made her feel no more or less important than any one of SNL‘s current repertory players. In fact, without appearances by Target Lady or those melodramatic Californians, Wiig’s return turned out to be a largely forgettable affair, with few sketches rising above the level of mediocre.

The episode, which featured cameos by fellow SNL grads Jason Sudeikis, Will Forte and 15-time host Steve Martin, also struggled with Donald Trump. Alec Baldwin’s first post-election appearance indicated that perhaps the show isn’t exactly sure how to make the president-elect funny with much of the country already fearing how he’s conducting himself.

BEST: ANDERSON COOPER 360º
This could’ve been a disaster, but the performances were top-notch. Wiig (as senior political correspondent Dana Bash), Kate McKinnon (as Trump supporter Kayleigh McEnany) and Kenan Thompson (as former Obama administration official Van Jones) were the standouts in this sketch that featured a roundtable commenting on a myriad of Trump controversies. Their responses remained exactly the same, but with each talking point found themselves getting more anxious in their delivery. It was eventually revealed that they were all just hosts, like the ones seen on Westworld, and a malfunctioning Cooper was replaced by alternate host Jake Tapper.

BEST: TARGET COMMERCIAL
There’s little to say about this one, other than the fact that it’s perfect. The best commercial parody of the still-young season advertised the retailer as an outlet for getting away from those relatives on Thanksgiving who probably won’t shut up about the election.

BEST: SURPRISE LADY
Sue might be Wiig’s most polarizing character of all, so it’s probably best she didn’t turn up until 12:55 am. This time around, she struggled to remain calm after learning that her nephew was coming home to surprise his mom on Thanksgiving. As far as sight gags go, watching Sue consume a decorative pillow in an effort to keep quiet was pretty great. 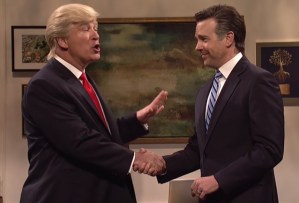 HONORABLE MENTION: COLD OPEN
We expected more from Alec Baldwin’s first post-election appearance, which came just one day after the president-elect agreed to settle his Trump University case for $25 million, and Mike Pence made the controversial decision to attend a performance of Hamilton. The sketch touched on the latter when Beck Bennett showed up as the VP-elect and mentioned getting a “free lecture,” but that was it. Jason Sudeikis’ cameo as Mitt Romney was also a bust. The sketch’s saving grace was Kate McKinnon’s Kellyanne Conway, who clearly regretted her choice to help lead Trump to victory. (Watch and discuss it here.)

WORST: OPENING MONOLOGUE
Let’s face it: Monologue songs are just the worst. Save for Lin-Manuel Miranda’s recent rap about his life’s journey that led him to SNL, there hasn’t been a single monologue song in recent years that wasn’t terrible. Wiig’s inaccurate sing-along about the history of Thanksgiving, which featured Forte and Martin, wasn’t very good, but at least it was bad in a “I won’t remember this in a week” sort of way.

WORST: SECRET WORD
How this Password parody ever became a recurring sketch is beyond us. Of all of Wiig’s characters, Mindy Elise Grayson was easily the most obnoxious, and the punchline was always the same: No matter how many times she was told not to, Mindy always gave away the secret word. It’s baffling that anyone thought having Strong do the exact same thing would freshen up the bit. The only laugh came from Bill Hader, who made a voice-only cameo as former host Lyle Round and apologized for not being there simply because “he didn’t want to” be.