“How did it come to this? How did all this happen?” Oh, Matt’s deadbeat dad, you are preaching to the choir.

During Friday’s Vampire Diaries, as I watched Tyler Lockwood’s nearest and dearest bid him a final farewell in the forest — where I’m pretty sure there are now more corpses than trees — a wave of disbelief washed over me. “How did we get to this place?” I asked myself (but not, like, out loud. I’m not a total lunatic).

I continued, “What happened to Season 1 Tyler, the simple-minded dick with nary a care in the world, save for fighting with Elena’s brother and trying to bone Matt’s sister?” (In other news, everyone I just referenced is either dead, out of town, or otherwise out of the picture.)

I guess it’s just finally hitting me that the end is near, that I’ve spent enough time with these characters to develop real attachments to them — even the ones I thought I’d never care about. Tyler deserved better, even if the gang’s impromptu funeral was emotional as hell.

DESPERATELY SEEKING SELINE | Speaking of hell, Tyler left a little parting gift for his best friend/human Band-Aid Matt Donovan — a box of research revealing Seline to be Sybil’s siren “sister.” Naturally, Matt relayed this crucial bit of news to Caroline, who immediately rushed home with Alaric, only to discover that the hot nanny had made off with their kids! And not to make light of every parent’s worst nightmare coming true, but can we talk about the girls’ drawing of Seline and Cade? Cutest smoking gun ever: 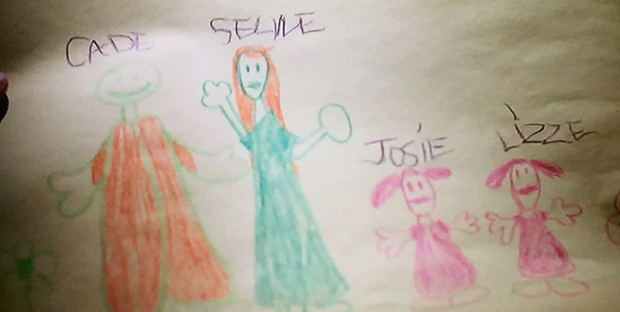 CABIN (ON FIRE) IN THE WOODS | Bonnie may not have her magic back (yet!), but as we all know, there’s very little that can keep a Bennett witch from screwing over a vampire. Using some sort of magical object — I don’t know the specifics, so don’t ask me for them — Bonnie trapped Enzo in the cabin, then threatened to burn the place to the ground. … No, wait, she did burn the place to the ground, narrowly making it out alive. It turned out the ultimate sacrifice, or even just the threat of it, was exactly what Enzo needed to flip his humanity switch back on. (Sorry, Elena, better luck next time!)

TOTAL MIND-FORK | Much like Bonnie’s cabin trap, I’m a little fuzzy on the magical specifics of this, but Sybil managed to break free from her makeshift prison this week, tuning fork be damned. She immediately went to Damon, who had been “put down” by Stefan and the others as a last resort — that was some really nice shooting from Caroline, by the way — so, as you can imagine, he’s pretty pissed.

What did you think of this week’s episode? Did you also have a minor existential crisis over Tyler’s death? Whatever’s on your mind, drop it in a comment below.