There’s dead, and then there’s “TV dead” — when you don’t actually see the victim’s body or the whole thing was an elaborately staged fakeout or, y’know, “secret twin.”

But make no mistake, the character revealed to be “under the sheet” in Thursday’s How to Get Away With Murder fall finale has most definitely taken his last breath.

Wes Gibbins (Alfred Enoch), had been presumed alive after “Fire Night” flash-forwards found him in a Philly PD interrogation room agreeing to testify against Annalise. But at the end of the hour, we saw him sneak out of the building after getting a voicemail from his mentor, only to wind up back at police HQ — this time on the medical examiner’s table, half his face burned beyond recognition. As Nate would later discover, however, Wes was already dead before an explosion went off at Chez Keating — the same blast that injured Laurel and left the musclebound investigator unscathed.

Before creator Pete Nowalk breaks down the decision to kill off a member of the Keating Five, let’s recount a few other highlights from Season 3, Episode 9, “Who’s Dead?”:

* Bonnie stopped Frank from committing suicide by reiterating their deep connection — and hinting at their other “deep connection” (wink wink) back in the hotel in Coalport. Later, though, when it was clear Annalise was being investigated by the DA (more on that in a second), she asked him to take the fall. “You love me — but you want me to jump on the grenade for all of us?” asked Frank. Um, yes she did. Because when she’s backed into a corner, Lurky McChurchmouse will forever and for always play for Team Annalise.

* On “Fire Night,” we saw Nate enter Annalise’s home office, in search of his ex, followed shortly thereafter by Laurel, responding to her boss’ request to convene for a meeting. And then — BOOM! — the house exploded, and all of the horrors that we’ve seen in flash-foward over the last eight episodes fell into place. 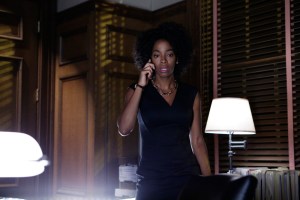 * In other news… Wes learned Atwood and those barely-there detectives were looking into the death of Rebecca, whose body turned up in the woods. Connor revealed to Oliver that he showed up frenzied at his door early in their relationship not because he was high, but because he was “traumatized.” Oliver then used his tech wizardry to perform a basic Google search and began to link Sam Keating’s death to Oliver’s meltdown. Oh, and yep, you didn’t imagine Michaela and Laurel smooching in celebration of their high grades on Annalise’s exam.

Now, onto our Q&A with Evil Mastermind Mr. Nowalk:

TVLINE | Can you say unequivocally that Wes is dead, that this isn’t some kind of trickery or subterfuge? He’s dead-dead?
Yes.

TVLINE | A one-word answer — hard to misinterpret. Did you know going into Season 3 that Wes would die? And if not, when did you come to the decision?
No, I did not know at the beginning of the season. I knew someone would be under the sheet — that was a decision we made the first day in the writers’ room. “Oh, that’s a fun little mystery!” As it went on, I got pains in my stomach as I realized what we’d promised the audience.

Obviously, part of me was hoping, “Maybe it can be some new character who I haven’t fallen in love with yet.” I kept waiting to come up with an idea that worked. Then it became clear the only way it could work would be if it had impact emotionally. We considered every option, ever character, and the poor actors realized that discussion was happening while they still had to do their jobs every day. It wasn’t easy. Episode 7 was when I thought, “Ugh, I really have to decide this.” And that’s when I did. Ultimately, it was about a gut feeling, and [killing off Wes] gave me the biggest pain in my gut.

TVLINE | Last week, there was a part of me thinking, “It had better not be Charles Mahoney or some minor character.” It would’ve felt like a copout — especially in relation to Annalise’s total breakdown after seeing the body. Was that always in your mind?
Yeah, thinking about the audience, I would’ve thrown my remote at the TV if I waited this long and it was Simon — which a lot of people guessed. The other thing that’s helped me get through the process is that Alfie [Enoch] is going to be with us for the rest of the season. Nothing beyond that is figured out, but I still get to write for him and he still gets to be at work. And for the audience, we don’t have to lose him completely, that’s made the bittersweet feeling a little bit better.

TVLINE | Presumably the second half of the season will delve into what happened in Annalise’s house — the explosion, the fire, Wes’ death, Laurel’s experience in the basement.
It’s a few hours of time, and we will be seeing those hours throughout the remaining episodes. In the first episode back, we’ll see what happened to Wes after he left the police station. We won’t get all the answers, but slowly, we’ll be pulling back the curtain. We’d been doing flash-forwards, and now we’ll be doing flashbacks. And by the end of the season, if not earlier, we’ll find out what actually happened to him and who killed him.

TVLINE | We know Annalise is in jail for murder and arson — and on the word of an informant. If Wes is dead — we thought he was talking to detectives in the same timeline, but now we know it was a few hours prior — does that mean someone else is the informant? Or were the detectives somehow thinking Wes was alive and about to turn on Annalise? I’m not sure I’ve got that entirely nailed down.
You are very savvy, mister! [Laughs] As you said, they said they had an anonymous source, but Wes never signed the agreement — so does that mean there’s someone else? That’s a big question in our first episode back, and we’ll get an answer to that that is really shocking. 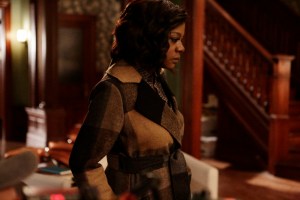 TVLINE | Hearing Annalise ask Bonnie in the jail cell, “Was it you?” That was so haunting.
If you’re Annalise, you’re not trusting anyone in your life at this point, which is a sad state of affairs for her. But we don’t know where a lot of those people were when the house burned down, so everything is up in the air.

TVLINE | The Mahoneys and Atwood, our single black female DA — are they in the mix in the latter part of Season 3? And are they viable suspects in Wes’ murder?
Yes and yes. Obviously, there’s a big investigation going on into Annalise. And it’s no coincidence that Wes just happened to testify against the Mahoneys the episode before he died. They both played a pivotal role.

TVLINE | Was it fun to bring back Rebecca’s body at the exact moment a lot of us had stopped thinking about it?
A writer pitched it to me and I was like, “Ooh, you surprised me!” I always want to be a show that uses the whole Buffalo, though. That makes it fun for the people who’ve been watching since the beginning.

What did you think of the HTGAWM fall finale? Were you shocked by Wes’ death? And who do you think killed the puppy? Grade the episode in our poll, then sound off in the comments!