Her name is The Ghost of Rhonda Lyon, and she approves this mess…

Hold up. Are we entirely sure Empire‘s late white hope would applaud hubby Andre’s fedora-sporting, abandoned-warehouse lurking, mama’s tatas-exposing power-grab? Actually, of course she would.

And while it’s most likely that Andre’s secret hack of Empire Entertainment’s emails/masters/customer info will end up with a beatdown from Lucious and a trip to the unemployment line, for now let’s just be happy that one of the Lyon kids made it through an hour-long episode without turning himself inside out in an effort to win Daddy’s eternally at-arm’s-length approval.

In the long term, though, I wonder if Andre will crack under the weight of having indirectly caused Jamal to descend into a terrifying pills-and-booze episode and possibly derailed his mother’s first real chance to break free of Lucious’ romantic grip. (That nude Cookie photo link, on the other hand? “What the hell y’all lookin’ at — they perky!” Plus, it led to shirtless Taye Diggs, so all is forgiven.)

On that chiseled, chocolatey note, let’s recap the action from Season 3, Episode 6, “Chimes at Midnight.” (Side note: Is that the actual head of a giraffe mounted on Baby Bella’s bedroom wall? Girl, bye.) 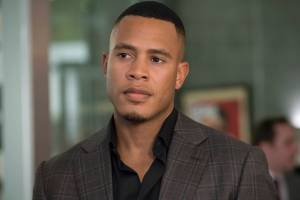 ONCE YOU GO HACK, YOU’LL NEVER GO BACK | Tiana’s face starts popping up with Season 1 regularity — on the cellular devices of various Empire employees. Turns out, it’s part of an anonymous cyber attack that’s captured every email ever sent from an Empire-owned device — and when Lucious and Cookie refuse to pay ransom, those missives cause Hillary Clinton-level headaches. Cookie’s naked selfie winds up on the news — but her plight ranks No. 2 behind the IT expert who gets a gun pulled on him by Lucious and his ass slapped by Thirsty. (Yes, I just typed the words “ass slapped by Thirsty. #JournalismDegreeAtWorkYo)

Andre’s search of Empire HQ turns up a thumb drive belonging to Tiana’s nasty ex Graham, and Lucious and Andre sic their goons on him for a beatdown more awful than Graham’s description of Lucious as “a dinosaur of a philistine era.” Boy, Andre sure does seem to get a giggle out of the violence! Turns out he and Lucious’ rival Von Cooper masterminded the hack — “I created a void only I could fill,” Andre boasts — and now the eldest Lyon son is president of Empire Extreme and has his dad’s undying trust, too. His one possibly fatal mistake? Revealing his duplicity to Nessa in an attempt to solidify them as the new king and queen of the company. If Ghost Rhonda doesn’t kill Andre, dude might be dodging Lucious’ bullets and Cookie’s broom by season’s end, no? Or maybe — please, maybe — someone will finally get the upper hand on the patriarch, and then not crumble under the weight of their guilt? That’d be a fitting tribute to Rhonda and her Deputy Mayor Alvarez roleplaying self, no? 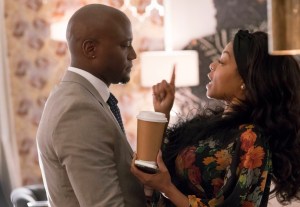 GIRL, LOOK AT THOSE BODIES — THEY WORK OUT | As Angelo announces his NYC mayoral run, Cookie’s cookies break the internet (so to speak), and thus she ends their nascent love affair with the warning that she couldn’t live with it if her checkered past derailed his bright political future. But later, as Angelo gets grilled about his relationship by a pack of reporters, he decides to stand in solidarity with his ex — tearing off his shirt and then wondering, “Is this enough or do I need to take my pants off, too?” Cookie is so taken by the naked act of chivalry, that she leans back in her bed and spits out the words, “I love you, Angelo.” But if a woman declares her love in an empty penthouse and no one’s there to hear it, will Lucious still do something terrible to jeopardize their happiness? 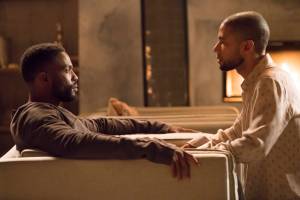 THE TRACKS OF JAMAL’S TEARS | Jamal just about loses his mind when his hot new tracks get deleted in the Empire hack, and it leads the already fragile singer-songwriter to indulge in more painkillers and booze and producer D-Major’s incredible torso (and other assorted body parts). When Derek gets up for a snack (not a euphemism), though, he finds Jamal unable to wake up — and mistakes “slapping and rubbing” for “placing a 911 call.” D-Major finall has to call Jamal’s sexy counselor Philip for help, and thankfully, they revive him with a cold shower. But — metaphorically speaking — the middle Lyon kid is in emotional hot water, and a possible love triangle, to boot!

IN OTHER NEWS | Nessa manages not to backhand Andre and Hakeem when they fight right in front of her like she’s the last sour cream and onion Pringle in the tube. Becky screwed over again by Xavier (aka Whiteguy McSkeevyface) — but this time, Thirsty catches wind and promises to show Lucious’ former assistant how to exact real revenge. And back at FBI HQ, Tariq discovers an email from Lucious to Andre promising a pair of payouts the day after the prison murder of Frank “Chris Rock” Gathers. Who you accusing of dropping story arcs now?

What did you think of this week’s Empire? Is Andre going to triumph for a change or will he be licking his wounds before your holiday shopping is done? Share your thoughts in the comments!