With Big Bad Prometheus still a threat to Star City, Team Arrow needs all the help they can get. But they probably weren’t expecting yet another new — and mysterious — crimefighter to appear on the scene.

This Wednesday’s episode (The CW, 8/7c) marks the debut of Vigilante, a moniker adopted by D.A. Adrian Chase after his family was killed by mobsters in the DC canon. So will the show’s incarnation of the legal eagle closely follow his comic book origins? 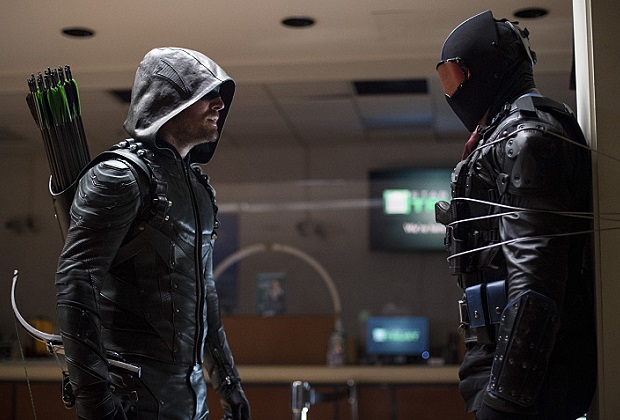 “I don’t want to say too much, because I’m actually really excited to surprise everybody,” his portrayer Josh Segarra said during TVLine’s visit to the CW series’ Vancouver set. “When I watch something that’s based off [source material], I’m excited to see the parts that I imagined in my head the most. So when I started reading the Vigilante comics, there were, of course, parts [where] I was just, ‘Oh, my God, I hope I get to do this! I hope I get to go down this road!’ And so far, I’m getting to do a lot of those things” — some possibly as early as this Wednesday.

“When you finally meet Vigilante, it’s a pretty exciting time for Chase and for the Vigilante,” Segarra teases.

For Oliver, the new guy on the streets leaves the hero “holding up a mirror [to himself] and seeing whether or not what he is doing is having an impact,” star Stephen Amell previews. “The thing that I like about the episode is that he learns that even if it’s not going as quickly as he wants, they really are on the right path.

“This isn’t the happiest that Oliver has ever been, but this is the most resolute and confident that he has been in his path,” Amell continues.

Meanwhile, the team is split on how to deal with the killer vigilante, who is trying to keep the city safe in his own way. Whether he is friend or foe to the group remains to be seen, but Segarra hints that his alter ego’s interactions will soon expand beyond just scenes with Mayor Queen.

Hints Segarra: “Chase starts getting involved a little bit more into the rest of the world.”