During Monday night’s Timeless, the historian finally gets up the courage to knock on her biological father’s door before fleeing their brief face-to-face. She probably would have run even faster had she known her pops is the mysterious Rittenhouse henchman who’s been threatening Rufus. Surprise!

The episode’s other big reveals and exposed secrets:

* While holding Wyatt captive, Flynn starts to detail some of his personal motivations. He recounts how he snooped around and followed Mason Industries’ time-travel money trail to Rittenhouse until his wife and daughter were killed. Rittenhouse then framed him for their murders, forcing Flynn to go on the run. Since he can’t go back in time and save his family, he’s determined to wipe Rittenhouse from the map. “And once I do, who knows? Maybe they’ll come back, and my girls will be there again,” he muses as his eyes start to water. (Who’s starting to feel for Flynn?) 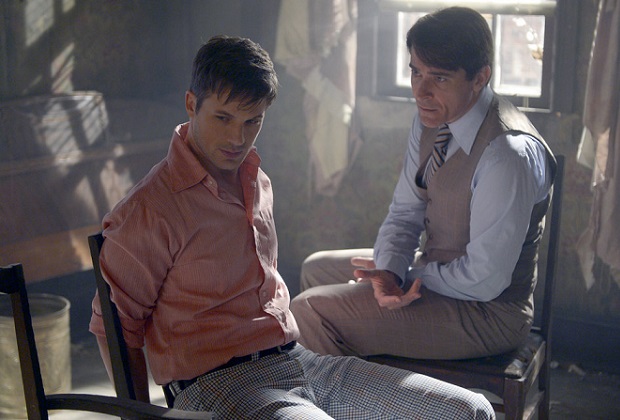 * In another tragic backstory, Lucy’s journal contains a surprisingly detailed account of the night that Wyatt’s wife Jessica disappeared. It turns out the soldier and his missus had a fight, so she got out of the car and he drove away to cool off. When he came back 20 minutes later, she was gone. Her strangled body was found two weeks later. As for who killed her, that remains a mystery, as does how Lucy knows about the events leading up to Jessica’s death. Did Wyatt open up to her because, in the future, they’re together?

* Wyatt and Rufus find out about the journal Lucy supposedly wrote, while Rufus explains that he’s been spying for Rittenhouse under duress. To resolve their trust issues, Wyatt asks Rufus to be a double agent and spy on the shady organization. Speaking of Rittenhouse…

* Back in Washington, Lucy and Rufus discover that the “doc” Rittenhouse is after isn’t a document, but a woman who was born into the group and fled it. She tells the time-travelers that Rittenhouse was founded in 1778, and no part knows what the other is doing. Even the member names are never written down; it’s all stored in her head.

Timeless fans, what did you think of the episode’s fatherly twist? Is the show’s mythology starting to come together for you?