There was plenty of anticipation going into this weekend’s Saturday Night Live following Donald Trump’s stunning victory to become the 45th president of the United States.

Along with host Dave Chappelle, perhaps best known for the second most beloved sketch comedy series of all time, Chappelle’s Show, the Not Ready for Primetime Players put together a stunning 90 minutes that both spoke to those still upset by Hillary Clinton’s ill-fated candidacy, and those ready to move on and give President-elect Trump a chance to govern.

Sure, there was a clear left-leaning bias with a cold open that mourned Clinton’s loss, but it doubled as a beautiful tribute to the late Leonard Cohen, who Kate McKinnon honored with a touching rendition of “Hallelujah.” And then came Chappelle’s thought-provoking monologue, which not only discussed the devastating trend of mass shootings and the rise of the Black Lives Matter movement, but ended with Chappelle wishing Trump the best of luck before asking that he give the “historically disenfranchised” the benefit of the doubt, too.

What followed was a series of sketches that both poked fun at the naïveté of select voters heading into the Nov. 8 election, and offered words of hope for the future of our nation.

BEST: ELECTION NIGHT
Chappelle and Chris Rock played the only black attendees at an Election Night viewing party, having to deal with a group of naive, white voters who were sure Hillary had this presidency in the bag. In the end, Rock hilariously explained how the Democrats managed to lose: “You’re replacing a charismatic, fortysomething black guy with a 70-year-old white woman. I mean, that’s like the Knicks replacing Patrick Ewing with Neil Patrick Harris.”

RELATED SNL: Kristen Wiig to Return as Host — Find Out When!

BEST: THE WALKING DEAD
Chappelle revived a bevy of Chappelle’s Show characters — including Tyrone Biggums, Silky Johnson, Chuck Taylor and Lil Jon — and got to play the menacing Negan in this parody of TV’s top-rated drama. After his beheading, Biggums, somehow still able to speak, broke the fourth wall to explain how our severed country can once again come together as one unified nation by learning to laugh together. Oddly inspirational words for a known crack addict!

BEST: WEEKEND UPDATE
As terrific as it was to see McKinnon’s Ruth Bader Ginsburg again, most impressive were Colin Jost and Michael Che, who were better than they’ve ever been as Update anchors discussing Trump’s victory. Echoing the message from the “Election Night” sketch, Che spoke of how the country is more segregated than ever in terms of leftist and right-leaning ideologies, and how that played a hand in liberals not thinking a Trump presidency was feasible. Jost, who has frequently been hit on by a certain cast member, had the best one-liner of all: “America is like Leslie Jones: addicted to white guys.”

RELATED If Jon Stewart Had Not Stepped Down From The Daily Show, Hillary Clinton Would Most Likely Be President

BEST: LOVE AND LESLIE
Kyle Mooney and Jones were great in this short film (are we still calling them Digital Shorts in the post-Andy Samberg era?) about a budding romance between the repertory players. Lorne Michaels chiming in to champion the relationship just so Mooney could lose his virginity was as perfect a moment as they come. Perhaps even better was Chappelle’s reaction when he realized Mooney and Jones had just sex in his dressing room. 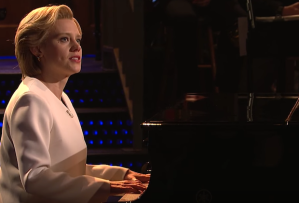 BEST: ‘HALLELUJAH’ COLD OPEN
What else can be said? McKinnon’s performance was positively spellbinding. It was both the perfect way for SNL to address Clinton’s loss without mocking Trump supporters, and an excellent tribute to Cohen. It was flawless, really. (Watch it again here.)