This week on ABC’s Once Upon a Time, Emma and Regina’s latest attack on the Purely Evil Queen backfired, as did Belle’s attempt to run away from Rumple.

Having been unable to track down The Dragon (Googling “Dragon +NYC” only resulys 104 Chinese food restaurants) for a consult on undoing the Charmings’ (rather adorably handled) shared sleeping spell, Regina gets the idea to trap the Evil Queen inside an enchanted hand mirror, using Henry as bait. Alas, the Evil Queen proves to be one step ahead of them and thus catapults Henry’s moms into the mirror, where they find themselves trapped — alongside the Dragon.

The Evil Queen then attempts to pass herself off as Regina, while Henry gets ready to take Violet to the school dance, but her heavy-handed lobbying for the lad to act like the royalty he is — combined with Emma and Regina’s attempt to contact him through a mirror at Granny’s — tip him off to the charade. The Evil Queen challenges her “son” to use the Hammer of Something that she procured from Rumple to smash the Dragon’s heart, in order to save his moms from the flying, fire-breathing beast the wise, old man has now become. Henry, though, uses the mallet to shatter the mirror, which, combined with the dragon’s magical fireball, frees the women from the mirror world, plopping them back in Storybrooke.

Henry then cashes in his raincheck with Violet, holding their own private “dance” at — where else? — Granny’s, while Regina and Emma look on from outside, full of pride at what a fine young man they raised. 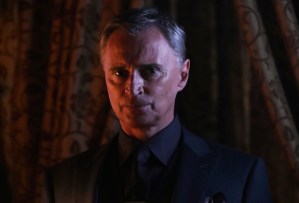 the idea for Zelena to open a portal, through which she and her unborn baby can escape to the Enchanted Forest. But to do so, Zelena needs the Sorcerer’s Wand from Gold’s shop. Cue Aladdin, who demonstrates exactly zero impressive feats of thievery to pinch the wand. Alas, Zelena oohs and ahhs over the reclaimed wand for a moment too long, allowing Rumple to show up and take it back, having caught on to Aladdin’s truly basic handiwork. Rumple then slaps a cuff on Belle to keep her and their son from ever escaping his reach — out of “love”, of course, he (again!) avows. And if that nasty bit of “imprisonment” hasn’t fully soured you on him yet, he reminds his bride that “Rumplestiltskin takes children.” Shiver. Later, back at his shop, Rumple seals his alliance with the Evil Queen with more tepid kissing, though he needs something from her first: Zelena, dead.

What did you think of “I’ll Be Your Mirror”?