All together now, The Blacklist fans: “Finally!”

Even though the NBC drama loves to toy with its viewers (see: the “death” of Liz Keen), Thursday’s fall finale seemed, at long last, to reveal the mysterious connection between Liz and Red.

And if Reddington is to be believed, he is Liz’s father, something that has been suspected since the series’ first episode.

To recap: Thursday’s episode found Liz once again taken hostage by Alexander Kirk, who was desperately seeking a way to stave off his life-threatening disease. But Red, hoping to save Liz and reunite her with baby Agnes, offered Kirk his life for Liz’s — a trade that Kirk easily accepted. 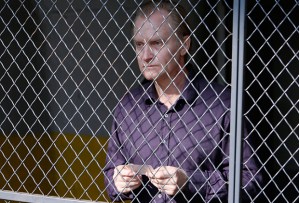 As Kirk tortured Red with all kinds of injections and suspect medical treatments, he remained incredulous that he was somehow not Liz’s father, as he’d been led to believe for years by Katarina Rostova. Still reeling from the news, Kirk began to interrogate Red, asking him again and again, “Are you her father?”

It seemed that Red would remain tight-lipped for the rest of the hour, but as he quickly descended into a delirious state, he admitted, “What do you want me to say? Yes. Yes, Elizabeth is my daughter.”

Later, after Red’s health had been restored, he paid Liz, Tom and Agnes a visit. “I really wanted my dad here to see [Agnes] grow up,” Liz confessed, to which Red replied, “He would’ve wanted that, too.” Symbolism.

Of course, knowing The Blacklist, it’s impossible to tell if Red is actually speaking the truth, or if his confession to Kirk was just one part of his mysterious master plan. But Daniel Cerone, a writer and executive producer for the series, took to Twitter on Thursday to assure viewers that this long-awaited reveal was legitimate.

I know what you’re thinking. Red NEVER lies. He said he wasn’t her father. But it will all make sense in end. #TheBlacklist @NBCBlacklist

For the super fan, this is not a retcon, nor will one be required. You just have to commit to end. We know our destination. #TheBlacklist

What do you think, Blacklist fans? Even if Red is Liz’s father, is this reveal too little, too late? Drop all of your thoughts on the fall finale in the comments section below.