Creators Matt Stone and Trey Parker had a new episode of their long-running animated satire planned for Wednesday night, just one day after the presidential election. On Monday, Comedy Central announced the episode would be entitled “The Very First Gentleman,” and seemed to assume a Hillary Clinton victory. But Trump’s win changed all that. The new episode title: “Oh, Jeez.”

All season long, South Park has mocked the Trump-Clinton race, labeling it a choice between a giant douche (Trump, or stand-in Mr. Garrison, in this case) and a turd sandwich (Hillary Clinton). For weeks, Mr. Garrison has been panicking at the prospect of actually being elected president, doing outrageous things to sabotage his own campaign, only to find his supporters love him even more. 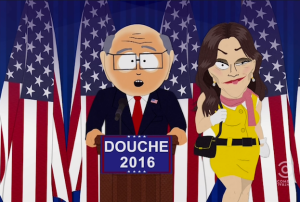 This week’s episode opens at an ill-fated Hillary Clinton victory party, with a stunned Randy screaming in disbelief at the election results while his fellow supporters vomit and shoot themselves in the head. Mr. Garrison, flanked by a Melania-esque Caitlyn Jenner, gives a victory speech where he vows to keep his campaign promise… to “f–k them all in the ass.”

Randy confronts Mr. Garrison, but finds he’s been hypnotized by the “member berries,” which freeze you in a state of blissful nostalgia — and gets hypnotized himself when Caitlyn vomits member berry juice all over his face. Later, a member berry-addled Randy tries to reassure Shelly that everything will be OK under a Giant Douche administration: “We’ve learned that women can be anything… except for president.”

To heal the post-election divide, the school’s PC Principal introduces a guest speaker: Bill Clinton, who says, “I was almost the First Gentleman of America.” (This seems to be a remnant of the planned Hillary-wins episode.) He invites the school’s boys to join “Bill Clinton’s Gentleman Club,” with the help of… Bill Cosby. (Shudder.) They sign a creepy song together — in matching sweaters, no less — before they help the school’s boys to reconcile with the girls. Bill pays a personal visit to Butters to explain that his wife is “a crazy bitch,” and she and the rest of America’s women are “piiiiiiiissed” about the Hillary loss. 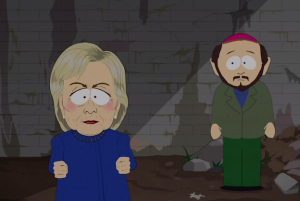 Meanwhile, the city of Fort Collins is under lockdown after being hacked by the Danish website TrollTrace, which has exposed everyone’s Internet history. Gerald is paranoid about being discovered as the online troll “Skankhunt42” — but he’s recruited by Hillary Clinton herself, who says the election was stolen, and enlists Gerald to infiltrate TrollTrace and locate the anti-troll technology to help her find justice. But he later discovers it was just an elaborate scam to entrap Gerald and his fellow trolls.

South Park is famous for its quick turnarounds, adding new jokes up until the very last minute in order to mock the very latest cultural events. In 2008, they aired a new episode the night after Barack Obama’s presidential victory that included audio from his acceptance speech. But this might be a new personal best for the series, considering they had to entirely scrap the Clinton version and produce a Trump version in less than a day.