In Wednesday’s penultimate episode of American Horror Story: Roanoke, Audrey declared, “Everybody’s dead!” — which was demonstrably false, since when she shouted it Lee was standing right next to her, very much alive, thanks. Still, the outburst succeeded in impressing upon new arrival Dylan (who’d played Ambrose in My Roanoke Nightmare) that the goings-on at the Millers’ former house were “not a joke.” Of course, even if the reenactress’ exaggeration hadn’t done the trick, what happened next undoubtedly would have have gotten the message across to Dylan that the variety of s— he was in was the deep sort. Read on, and we’ll go over all the gory details. 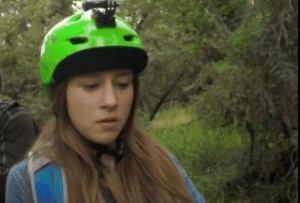 FRESH BLOOD | As “Chapter 9” began, a trio of thrill-seeking young hikers (including Taissa Farmiga as Sophie and Jacob Artist as Todd) hoping to post pics of the haunted house on Instagram during the blood moon happened upon first Diana’s ghost, then her remains. Subsequently, the kids tried to relate what they had seen to the police, but alas, the authorities were beyond skeptical since, when officers went to the scene of Diana’s accident, they found no body. On the plus side, at least the threesome’s spooky upload got them a buncha new followers. #winning

HERE TODAY, DEAD TOMORROW | Inside the haunted house, once Audrey was done informing Dylan (Wes Bentley) that there had been no need for him to show up to stir the pot, because it had already runneth over — with blood — the former soldier was making plans to get them all outta there. First, however, they had to find Monet. Upon arriving at the Polks’, Dylan was pretty much “screw ‘no man left behind,’ let’s just take a truck and scram!” But Lee was determined to get back her confession to Mason’s murder. So, while she searched for the evidence, Audrey located Monet and dispatched Old Man Polk. Outside, Dylan appeared to be murdered by (if I’m not mistaken) Lot, who then drove off in a rush to escape the blood moon.

NOWHERE TO RUN | With nowhere better to hide out, Monet and Audrey fled back to the haunted house. The Brit assumed that, since she had the tape of Mama Polk’s murder — and, they soon discovered, Lee’s confession to Mason’s murder — Lee must be dead. In fact, she wasn’t, she had been saved by Scathach, and upon encountering the Instagrammers, killed Todd. The remaining duo were cornered by Dylan’s ghost in Sidney’s production trailer, where, looking at the monitors, they saw Lee heading for the house — and Audrey and Monet!

POSSESSED | “We have to do something,” Sophie said as she and Milo observed Lee entering the house. “We have to stop her.” As the duo headed back into the woods, Monet and Audrey heard a noise and discovered that Lee had returned. “You don’t belong here,” she said, clutching a cleaver and sounding a lot like The Butcher. When Monet called Lee out, Lee pushed her over the stairway railing to her death. By and by, Lee hacked Audrey, too, and shut her in the storm cellar. By then, Sophie and Milo had arrived at the house to see the real Butcher disembowel Dylan.

SURVIVOR: ROANOKE | As the hour neared its conclusion, a title card informed us that we were about to see footage from Todd’s iCloud. What was it? Sophie and Milo being impaled on stakes and burned alive on Lee’s orders. The morning after, the police descended on the house and found the kids’ still-smoldering corpses. And Monet’s body. And Dominic’s. And Dylan’s. Only Lee appeared to still be alive. “Who did this to you?” a cop asked her. In response, she screamed and pleaded to be taken away from “this hellhole.” But wait — Audrey was alive, too, it turned out, and just then crawled out of the storm cellar. When Lee approached her, having apparently no recollection of her possession, Audrey grabbed a cop’s gun. But before she could fire, the police shot her down.

So, what did you think of “Chapter 9”? And what are you hoping to get out of Asylum survivor Lana’s interview with Lee in the finale? Hit the comments.