At the start of Colbert’s Election Night broadcast, Donald Trump was leading Hillary Clinton in electoral votes, with the Race to 270 leaning in the Republican hopeful’s favor. The hour, which began following The Donald’s win in Ohio and Clinton’s victory in Virginia, featured a plethora of special guests, including Independence Day‘s Jeff Goldblum, The Circus‘ Mark Halperin and John Heilemann, and Supergirl‘s Laura Benanti, who once again portrayed Melania Trump.

Following an animated cold open that traced The Donald’s desire to run for office back to President Barack Obama’s harsh words at the 2011 White House Correspondence Dinner, Colbert came out to speak about the potential unforeseen outcome.

“America doesn’t have dictators… yet,” Colbert began, introducing himself to the premium cable audience as “Stephen F—king Colbert.” “What a year tonight has been. Right now… the election is too close to call, and too close to contemplate. … This one is a nail-biter, and a passport grabber. It feels like we’re trying to avoid the apocalypse, and half the country is trying to grab onto the asteroid.” (Watch the monologue here.) 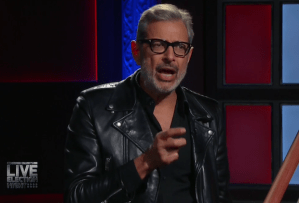 Later, Colbert was interrupted by Goldblum, who warned him that Trump is “destroying everything in his path, including the Republican Party.” He also noted that evolution has taught us that the candidate’s ego will grow larger no matter the outcome.

Following Goldblum’s exit, the host was joined by Halperin and Heilemann, who had the audience gasping when declaring Trump was the likely winner. At the time, however, Trump was trailing Clinton by just one electoral vote, 188-187. They also spoke about the false hope granted to the Clinton campaign by FBI Director James Comey, when he announced on Nov. 6 that the latest email controversy was a non-scandal. “This is the darkest presidential campaign I’ve ever covered,” Halperin remarked. “Good line for a comedy show, eh?” Colbert then declared that he wasn’t “sure we’re doing a comedy show at this point.” Seconds later, Trump was declared the projected winner of Florida.

Perhaps coming at the perfect time, Colbert then brought on Benanti, who reprised her role as Mrs. Trump to declare she wouldn’t concede from her race for First Spouse until all electoral votes were counted. In doing so, she plagiarized the likes of Gloria Gaynor’s “I Will Survive” and Billy Joel’s “We Didn’t Start the Fire.” Before exiting, she thanked both Vladimir Putin and all the voters supporting her husband.

Running over 15 minutes past midnight, Colbert ended the special with an unscripted monologue that found him stressing the importance of moving past this election cycle. He encouraged viewers to get back to their lives and laugh more, because “laughter is the best medicine.”

“This has been a bruising election for everyone that has come to an ending that I did not imagine,” he said. “We all now feel like Rudy Giuliani looks. We’re more divided than ever as a nation… So how did our politics get so poisonous? I think it’s because we overdosed, especially this year. We drank too much of the poison.” He then asserted that there is still more that brings us together than tears us apart, and brought the audience to its feet when he declared we can never have another election like this again.

What did you think of Colbert’s Showtime special? Grade it via our poll, then voice your thoughts below.