Chicago P.D. star Jesse Lee Soffer has a message for fans who think that Erin Lindsay and Jay Halstead shacking up will soon lead to a milestone of the diamond variety.

“People live together for a while. We’re getting a little ahead of ourselves,” the actor warns the engagement hopefuls. “They’re career cops. Hold on a second! Let them focus on their professionalism for a minute!” he adds with a laugh.

Co-star Sophia Bush “definitely” thinks it’s too early in the pair’s relationship to be talking about ring-popping. “I don’t think that’s Erin’s priority in any way,” she explains.

While Jay won’t be putting a rock on his girlfriend’s finger in the near future, the couple’s connection will be strengthened when Erin’s absentee dad Jimmy Sanguinetti (played by Tony Crane) re-enters his daughter’s life and causes plenty of trouble, as Soffer and Bush reveal to TVLine below.

TVLINE | Things are going so swimmingly for Jay and Erin right now. Do you foresee any obstacles coming their way?
SOPHIA BUSH | I never know with that stuff, but what I think is cool is that we’re not making a big deal out of it. It’s two people who’ve been in a relationship a long time, who said, “Alright, let’s give it a try,” and they’re just seeing how it goes. … It’s cool that it’s just sort of working. There doesn’t need to be any drama. We’ve got a lot of drama [and] a lot of entertainment value with the cases. So I’m sure it’ll be nice until the writers decide it doesn’t get to be anymore, and then we’ll see what happens. 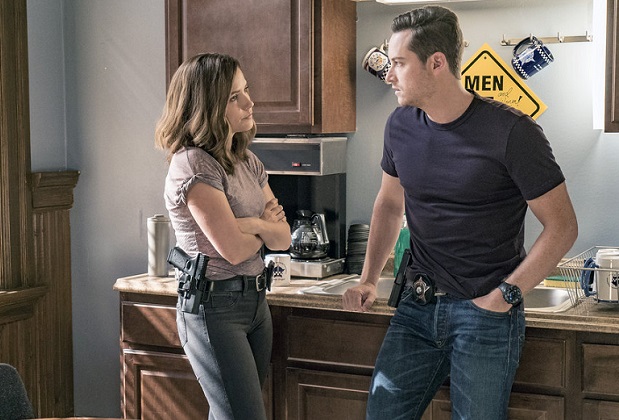 JESSE LEE SOFFER | [They are] very domesticated right now. It’s kind of a nice break from all the conflict with Voight [about] “will they or won’t they be able to be together,” and “is he going to put an end to it.” It’s a nice break to just relax and play out some of that relationship dynamic when you come home from work and see these characters deal with the stuff they see at work in their private lives.

TVLINE | Will we be seeing more scenes of them at home? So far, it’s mostly just been about them moving in together.
SOFFER | Absolutely. I’m sure every few episodes, they’ll throw something in for the fans.

TVLINE | What can viewers expect with Erin’s family coming back into the picture?
BUSH | There was a whole storyline last year where Bunny told Erin that her father wanted to meet her, and it just didn’t make it in. The cases were too big and complicated. So they’re saying that they might bring it back in now. All that I know so far is that [Bunny] tells me he’s in Chicago and wants to meet me. I know that a couple of facts that Erin thought she knew about her dad turn out to not be true.

TVLINE | With her father resurfacing, does Erin find herself leaning on Jay?
SOFFER | Yeah, I think more so than ever, she leans on Jay instead of Voight, because they’re closer now than they’ve ever been. She is going to lean on him in that situation. We don’t know what that’s going to be yet. We haven’t seen those scripts yet. We know that it’s going to be a conflict. We know that he’s going to cause a lot of trouble.

“Linstead” ‘shippers, is it too early for an engagement? And are you excited to meet Erin’s dad?