The Odd Couple on Monday paid its respects to the late Garry Marshall, who not only worked as an executive consultant on the CBS remake, but portrayed Matthew Perry’s father, Walter. 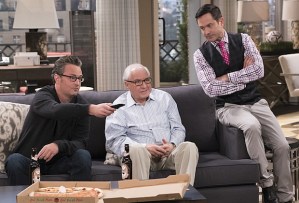 In celebration of the comedy legend, who in July died at age 81 due to complications from pneumonia, the episode welcomed a bevy of stars from his previous sitcoms, including Happy Days‘ Ron Howard, Marion Ross, Anson Williams and Don Most, Mork & Mindy‘s Pam Dawber, and Laverne & Shirley‘s Cindy Williams and Penny Marshall (who is also Marshall’s sister).

The aptly titled “Taffy Days” found Oscar (Perry) looking to grant Walter’s dying wish. Per his dimwitted attorney Stanley (played by Howard, who appeared via Skype), the lifelong candyman wanted his ashes scattered in the river behind the first factory he ever operated. He also wanted estranged business partner Patty (Marshall) to be present at the time of the scattering. As revealed by Oscar, Walter and Patty hadn’t spoken in 30 years. We’d soon learn that they became estranged because of a disagreement about naming a flavor of taffy. 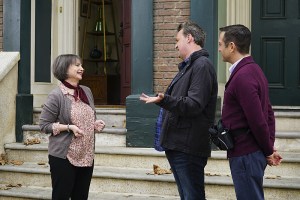 Oscar and Felix eventually embarked on a road trip in search of Patty, and along the way bumped into many of Walter’s acquaintances. Among them were Patty’s mother Edna (Ross), her sister Vivian (Williams, pictured right), bartender Arnette (Dawber) and former factory workers Clayton (Williams) and Fred (Most), who spent some of their “happiest days” (heh!) working for Walter.

They finally found Patty at the original factory, which for three decades she kept in business even after her dispute with Walter. While there, Oscar and Felix wound up getting into an argument and accidentally dumped Walter’s ashes into a food mixer. As a result, the trio were forced to empty a giant vat of taffy into the river in order to honor Walter’s last request.

Oscar, who kept his emotions in check through much of the half-hour, eventually broke down as he and Felix waited for the slow discharge of ash taffy to make its way into the river. “Dad, I’m really going to miss you,” he shared, wistfully. “I hope that wherever you are, the New York Mets are on and it’s always the ’86 World Series. I loved being your son, and I still do.”

As the episode came to a close, a title card reading “In Loving Memory of Garry Marshall” flashed across the screen, showing pictures of Marshall with both his original and most recent Odd Couples (Jack Klugman and Tony Randall, and Perry and Thomas Lennon, respectively) as the original 1970 theme song arrangement played in the background.

What did you think of The Odd Couple‘s tribute to Garry Marshall? Grade the episode via our poll, then drop your thoughts in a comment below.