To paraphrase the iconic Church Lady, that was anything but special.

Now, to be fair to TV’s Sherlock, the actor had virtually nothing to work with. Unfortunately, his poor accent work only contributed to already ghastly sketches that required him to do such things as dry-hump a dead grandmother and portray a closeted adjunct professor pouring his heart out to a disinterested student played by Pete Davidson.

Even weirder than the misuse of Cumberbatch was that this last episode before the Nov. 8 presidential election was more fixated on the Chicago Cubs’ historic World Series win. Ball players Anthony Rizzo, David Ross and Dexter Fowler showed up not once, but twice, appearing in both the aforementioned dead grandma sketch and with Murray during “Weekend Update.”

BEST: CHURCH LADY
Carvey and Colin Jost’s “midnight shindig” was the evening’s saving grace. Perhaps only great when compared to the sketches detailed below, we were particularly tickled when Church Lady said that “Jesus loves a good joke,” only to insinuate that Jost didn’t have any. Also worth a chuckle was her inability to distinguish who in the entertainment industry was gay, pointing to The Big Bang Theory‘s Jim Parsons, How I Met Your Mother‘s Neil Patrick Harris and Broadway extraordinaire Nathan Lane as the only three straight men left in Hollywood.

WORST: SURPRISE BACHELORETTE PARTY
This tasteless sketch found Aidy Bryant as an elderly woman recently engaged to be remarried. And while being surprised startled her to death, not a single one of the party’s attendees realized she was dead, as they were all too distracted by Cumberbatch and Mikey Day as a pair of exotic dancers, and the eventual arrival of Rizzo, Ross and Fowler.

WORST: GEMMA & RICKY
Cumberbatch as a poor man’s Criss Angel could’ve been funnier with a better script, but nothing could have been done to salvage the obnoxious Cecily Strong character, who for some reason spoke like Russell Brand.

–
WORST: MEETING WITH MR. SHAW
Here’s the whole joke: A prospective hospital benefactor has a bird statue for a head. That’s it. We’d say more, but we’re at a loss for words. This was legitimately mind-numbing. 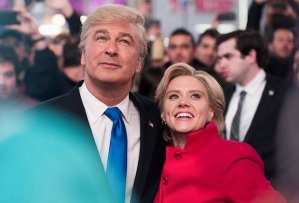 WORST: COLD OPEN
It began as an indictment of the media for ignoring Donald Trump’s latest controversies in favor of covering Hillary Clinton’s emails. It culminated in a generic plea for viewers to get out and vote. Why?!

Saturday Night Live is not the news. It’s allowed to have a point of view. For the sketch to suddenly morph into a spineless PSA means that Lorne Michaels & Co. still don’t realize that viewers were hoping for SNL to take a stance during this brutal election season. For all the work it’s done to try and repair its image after letting Trump host nearly a year ago to this day, this felt like the show saying it’s contribution to the political discussion isn’t important or necessary. That sentiment couldn’t be any more wrong.  (Watch and discuss the sketch here.)

Have at it, folks: Was this the weakest SNL of the season, or worse, of the calendar year? Grade the episode via our poll, then hit the comments and tell us whether you agree or disagree with our assessment.