To be perfectly honest, I’ve lost track of the number of times Damon and Bonnie have tried to kill each other on this show. But it also never gets old, because — as Sybil so astutely discovered — they’ve got a crap load of history between them. Perhaps even some unresolved feelings?

Bonnie insists that’s not the case, but it was about time someone addressed the elephant in the room. Honestly, all that time alone together in that prison world, and not so much as a peck on the cheek? (For what it’s worth, I really don’t think Kai would have minded watching.)

But the cherry on top of this Bon-ana split was Sybil’s ultimatum, forcing Bonnie to decide which of her man friends would continue walking the earth, and which one would literally go to hell. (I mean, she didn’t call it “hell,” but “an eternity of darkness and pain” can only mean one of two things — and I doubt Sybil was referring to an eternal Trump presidency.)

Surprisingly — or not, since I can never tell what’s going on in Bonnie’s head — she chose to spare Enzo’s life. “I know my friend is still in there, and I’m going to have to live with that,” she told Damon. “I just can’t let him die. I choose Enzo.” The next 10 minutes were kind of a blur, but here’s the important stuff: Enzo switched off his humanity (“If anyone can pull me back from the precipice, it’s you,” he said before planting one last kiss on Bonnie), Sybil was captured, and Damon rode off into the night after bidding his brother a fond “applesauce penguin.” I mean, a fond farewell.

Determined to meet his quota for the quarter, Damon went back to his old routine — you know, lying on the road and eating motorists — when he was greeted by a familiar face: Tyler Lockwood! With phenomenal facial hair! And a gun!

Unfortunately, this reunion didn’t end with Damon seeing the light and vowing never to feast again. Despite Tyler’s best attempt at reverse psychology, the episode came to a close with Damon slurping him up like a Capri Sun. (But is he really dead? Is his funeral what eventually brings Matt back to Mystic Falls?! For the record, I really hope I’m wrong.) 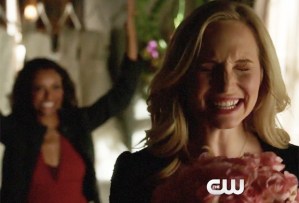 THE WEDDING PLANNER | Did you really think a psychotic siren and a brief fight to the death would keep Caroline Elizabeth Forbes from planning the #SterolineJuneWedding? I mean, she didn’t get very far — Damon, that little bouquet-snatcher, cut her shopping day short — but I’m really loving the idea of Caroline entering the ceremony on a unicorn. I also loved Caroline’s thoughts on Damon at the wedding (“He’s not sitting at the head table!”) and Bonnie fully acknowledging her position as runner-up for maid of honor. Hopefully, they’ll at least wheel in Elena’s coffin so she can be present for the big day and maybe get a piece of cake.

LET’S DO THE TIME WARP AGAIN | How are you feeling about all these flashbacks? Personally, I think they’re really well done; it’s a nice way of honoring the past six seasons (Sheriff Forbes!), and from a production standpoint, it’s a convenient way of incorporating Elena into the story without, you know, actually having Nina Dobrev at the ready. (My only complaint: Isn’t this, more or less, just a reversal of Elena’s Season 6 storyline when she forgot about Damon?)

OK, let’s talk about this week’s episode: Do you think Tyler is really dead? Will we actually get the #SterolineJuneWedding? And how glad are you that someone finally asked Bonnie about Damon? Whatever’s on your mind, drop it in a comment below.