Twelve years ago, Sarah Jessica Parker said goodbye to HBO as the final episode of Sex and the City aired. Now she’s saying hello again with Divorce (Sundays, 10/9c), a caustically funny comedy about a husband and wife whose marriage is rapidly crumbling — once college sweethearts, now sworn enemies.

Four episodes in, Parker’s character Frances and her husband Robert (Thomas Haden Church) have tried counseling and mediation to settle their differences like mature adults. But with an embittered Robert discovering his inner men’s-rights activist (he complains to a friend, “Seems like it’s open season on men around here”), it’s looking like the split will be long and nasty. And thanks to creator Sharon Horgan (Catastrophe), the toxic atmosphere between the two is spiked with some wonderfully vulgar dialogue.

Here, Parker speaks with TVLine about why she decided to return to TV, and the long road her new series took to get on the air. She also discusses her “easy” rapport with Church, the possibilities for a second season, and how her character Frances has almost nothing in common with Carrie Bradshaw (besides her looks). And speaking of Carrie: Yes, she also gives us a status update on a possible third Sex and the City movie.

TVLINE | You must have read hundreds of pilot scripts over the past decade. So what was it about this script, and this character, that made you say yes?
Well, I actually started developing this project about four years ago. I was really interested in exploring a marriage, and I thought there were rich possibilities to investigate a long-term committed relationship. And initially, it was an affair, and for a while, we called it The Affair, before The Affair was on the air. [Laughs] 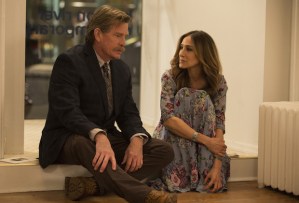 When we went to HBO, they were very enthusiastic about the idea. Eventually, we got to this impasse where we couldn’t sort out the story we wanted to tell. But HBO said, “Why don’t you meet this crop of writers?” And Sharon [Horgan] was among them, and we met her, and she was very excited about the things that interested us. Not only that, but she had a lot of her own thoughts about how to explore a marriage. So we loved her, and she went off and wrote an outline, and we loved the outline, and from there, we went to script, and then rather quickly, we went to pilot. So like all things in the development process, it takes time. But some things are worth the wait.

And actually, it became clear to me, before we hired Sharon, that HBO was thinking that I would play the woman in the story — which I had sincerely not thought of. I know well what that means, in terms of the commitment it deserves, and what it would mean for my family and my life. But I became very excited about it. And the more I knew the story we were going to tell, it just became very clear to me that this was the first woman since Carrie Bradshaw, in terms of television, that I thought was as interesting, as complicated, would be as fun to explore and have time with.

TVLINE | Everybody wants to compare Frances to Carrie Bradshaw. I don’t think they’re very much alike, but could you see Carrie, ten years or so into her marriage with Big, reaching the point that Frances has reached with Robert?
No, I think… given the backstory we’ve created about who these people are, they’ve been together since college, and that’s a very different experience than meeting someone in your 30s and making the decision to pursue romance and commitment. Carrie’s commitment to Big came after a long, long time. They had to really fight for each other. They married as mature adults. I think that’s a very different relationship.

So ten years into that kind of relationship doesn’t necessarily lead to the same thing that 17 years into a marriage, from the time you were very young people, and you factor in children and financial stress and real disappointments and infidelity and changing… you know, people grow from college. What they want changes. What was once charming is not so much so. Those qualities that draw you to a person when you’re 18 are very different than what you’re looking for as a 30-year-old. So I feel as if, with the exception of Frances and Carrie looking alike, because of me [Laughs], that’s kind of where the similarities end. 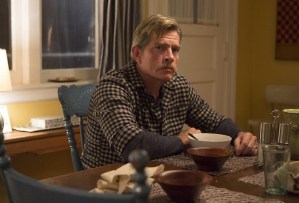 TVLINE | Thomas Haden Church is so great as Robert. How do you two build up that rapport of having been married for years and harboring these long-simmering resentments? At times, it feels like a two-person play.
Well, something that’s sort of odd about divorce is: This endeavor to separate yourself requires the other person. I mean, how ironic, that in order to get divorced, you need this other person more than ever? [Laughs] So it is like a two-hander, and they’ve written some really nice, long scenes. We’re always encouraging them to write scenes that are not unlike a play, where people just talk and talk and you can shoot it in a wide shot.

But Thomas and I met when we did a movie together called Smart People. Though I didn’t play opposite him, I did have scenes with Thomas, and I just loved working with him. There is a real mutual respect and affection, and we’re both grown-ups, and we’ve both been in long-term relationships, and we can both imagine what that is. So without having spent 17 years together, when the writing is good and you really love playing opposite this person, you sort of figure it out. That’s what the first season of a series is often about: finding your sea legs, and figuring out this language we’re speaking, and faking a path and then coming to a point where you don’t have to fake it anymore. It’s so easy with him. It’s one of the really great delights of this experience.

TVLINE | So is there a multiple-season plan for this show? Does this turn out to be one of those contentious divorces that drags on for years?
Yeah, we’re just finishing going over an outline for Season 2. So hopeful we’ll do that. [Laughs] We’re putting our directors into place. But I think that it doesn’t have to drag on. The title suggests a sort of limited idea, but really, it’s a part of an identity. Once you’re divorced, you’ll always be a divorced person. So what does that mean in the future? How are you a divorced mother of two children, figuring out a new vocation, a life, your finances? So in a way, I like that Divorce sits there without necessarily battle and combat for another season. It just says, “OK, so now what?”

And for many people, I think, that’s a really recognizable and relatable journey: surviving the attempt at divorce, and kind of repainting your portrait. For a while, your portrait included this other person, but now what is it? To be a single person at a certain age… to be single today is so radically different, with technology. It asks of such a different part of you, and yourself. I would imagine it would be very wonderfully daunting for her. 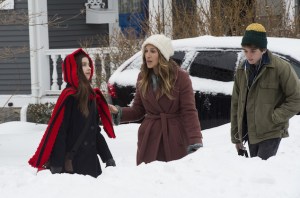 TVLINE | One of the things I really like about the show is the contrast between this picturesque upper-class neighborhood and the unhappy people living there.
Yes, we shot in Hastings [a New York City suburb] primarily, where the show takes place. It’s so cinematic. Shooting in winter, it was very much the look that I wanted. It provides a lot of really lovely tableaus for us. Yeah, it’s like the [John] Cheever stories. That’s very much how Cheever describes middle-class American life, that there is unhappiness. It doesn’t mean it’s a constant chronic state, but happy homes on the outside often shelter a lot of sadness and disappointment. But they also shelter a lot of joy and triumph as well. And I think the second season is going to be a lot about that. We’ll move out of winter, which was a wonderfully metaphorical mood for us, but now it’s time to move into spring.

TVLINE | Finally, it’s my journalistic duty to ask about Sex and the City…
[Laughs] That’s OK!

TVLINE| What’s the status on a possible third movie? Is there a script?
Well, I’ve described it as: There are these things called warming drawers, and they’re used to keep the plates hot. Before you serve the food, you make sure the plate is warm. So I’ve said it’s not on the table — which is where people would like to be, which is so nice — but it’s in the warming drawer. There is no script, but there is an idea for what that story would be. [Sex and the City showrunner] Michael [Patrick King] shared it with me many years ago. And the question is, if and when?

We try to be careful about talking about it, because we don’t want to toy with people or mess with their emotions. People have really invested so much in that group of women, and those stories. We want to be considerate and mindful and not yank them around, you know? So I’m careful about how we talk about it, because I don’t want anyone to try to read between the lines, or tease something out of my words that doesn’t exist.

TVLINE | You mentioned Michael Patrick King. Are you two in regular contact about the third movie?
We speak all the time. He’s one of my closest friends. He and I speak both for professional reasons and personal reasons. And when we have spoken about the idea of a third movie, he shared that idea with me, but we don’t have ongoing conversations about it. But we’re in touch all the time. We email all the time. He will always be a really important part of my life.

Are you enjoying Divorce so far? Hit the comments and give us your take on the first four episodes.