We’ve got questions, and you’ve (maybe) got answers! With another week of TV gone by, we’re lobbing queries left and right about shows including Once Upon a Time, Supergirl, Agents of S.H.I.E.L.D., Big Bang and Supernatural! 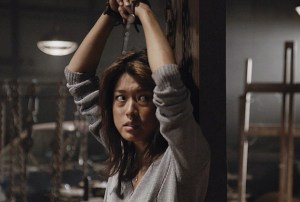 1 | The way Hawaii Five-0‘s Kono and Adam seem to get terrorized a few times s a season, did you think/hope their latest ordeal would be revealed as an elaborate Halloween prank?

2 | Granted he’s only been in one episode, but is The Walking Dead‘s ridiculously over-the-top Ezekiel proof that what works on the pages of a comic book may not work on the TV screen? And at this point, doesn’t it just make you sad when the heroes arrive someplace as lovely as The Kingdom, since you know disaster cannot be far behind? On an unrelated note: How off-the-charts awesome was the kill in which the walker’s face got sliced open?

3 | Why did Quantico‘s Alex take her mask off, especially when it helped her to blend so well with the Citizens’ Liberation Front terrorists? And are we supposed to believe that a few overheard conversations suddenly made her fluent in Swahili?

awesome to see Masters of Sex‘s Libby so empowered this season? And can we all agree that Bill Masters should never wear a mustache ever again?

5 | Which lad was more petulant this Sunday: Once Upon a Time‘s Henry or The Strain‘s Zach? (Sorry, this was a rare trick question; no kid on Earth is as sulky as Zach.)

6 | When Westworld‘s Sylvester told Felix, “Personality testing should’ve weeded you out in the embryo,” was it a lame put-down or a hint that the future in which the story takes place is ruled by harsh eugenics?

7 | Is Timeless going to take a different trip every single week? Will the team ever just hang back for an episode, to deal with “life” stuff? Or have one adventure span multiple episodes?

8 | Wouldn’t it be a blast if the characters from Timeless and Legends of Tomorrow each traveled to — and bumped into each other — in 1890s England, to ensure that H.G. Wells writes The Time Machine? 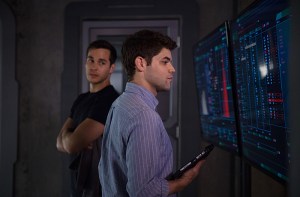 /Maggie, Winn/Mon-El and Kara/Lena bonding scenes be far more interesting — and the possible outcome of one of the pairings be more surprising — if it hadn’t been revealed over the summer that a DC TV character will be exploring his/her sexuality this season?

10 | Is it safe to say that, this many years into Jimmy Kimmel’s annual shtick, many of the “I Told My Kids I Ate All Their Halloween Candy” rugrats are getting coached by their folks, to make the cut for broadcast?

11 | Why was The Flash‘s Julian, who is a CSI, confronting and arresting a suspect himself, waving a firearm? (What is this, CSI?)

12 | Atlanta viewers: Who among you knew right away the reason why those people were dressed as cows in the season finale?

13 | Was Tuesday’s This Is Up the first episode of the freshman hit that didn’t feature a major character engaging in a thoughtful conversation while sitting on the floor with their back up against a wall? 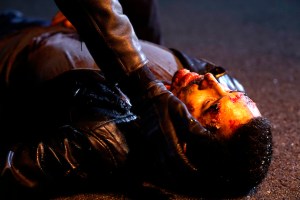 wasn’t available to cameo on Agents of S.H.I.E.L.D. as motorcycle-riding Ghost Rider Johnny Blaze? After all, as “Cage” has said on SNL, it had one of the classic elements he looks for in a role: “It exists.”

15 | Any other Arrow fans still getting used to “J.J.” being the name of Dig’s now-male kid?

16 | If American Horror Story: Roanoke‘s Lee wasn’t participating in Return to Roanoke in order to clear her name (as she initially insisted she was), why did she do the follow-up series? Also, we’re all hoping Sarah Paulson’s character survives purely so we can get a scene in which Paulson — as Asylum‘s Lana — does a follow-up interview with herself-as-Audrey, yes?

17 | Did we miss a Big Bang Theory time jump, or has Bernadette’s pregnancy timeline accelerated at an unnaturally fast rate?

18 | Sure, “numbers guys” have noted there’s actually little overlap between Pitch viewers and MLB baseball fans, but how does Fox not have series star Kyle Bunbury throw out a first pitch during the World Series? 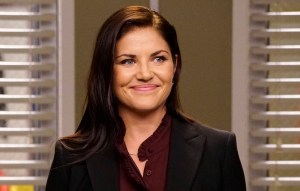 Minnick as a love interest for Arizona — thumbs up or down? And regardless of how you answer, how much would you not like to be a patient in an OR where she was pushing residents to practice on you?

20 | Can Pitch please make the waitress who partied with Ginny her new bestie? And speaking of the plucky cater-waiter, it OK to speculate that Cara is the great-granddaughter of Agent Carter‘s own waitress BFF, Angie?

21 | Is Legends of Tomorrow‘s Ray now a genius in all sciences, from physics to microbiology? Also, is Amaya almost always going to channel the strength of a gorilla? (Does the CW Seed’s Mari McCabe tap into a greater variety of beasts?)

22 | Did Supernatural case-of-the-week this week hit the human horror spot?

23 | Why aren’t more people watching the comedic blessing that is Loosely Exactly Nicole? (Other than the fact that MTV banished it to Friday nights?)

24 | What’s the over/under on the real Hillary Clinton and/or Donald Trump making a cameo on this weekend’s Saturday Night Live?