It’s Casual Thursday this week on Legends of Tomorrow (The CW, 8/7c), if only because Ray Palmer doesn’t have a suit.

Fact is, though, the tech whiz sacrificed his Atom armor last week, in the name of felling a Shogun in feudal Japan. So now he is left wondering what if anything he can bring to the series’ titular team — especially since whipping up a replacement suit will require more than carbon fiber, LED bulbs and 9-volt batteries.

“He’s going to be without the suit for some time,” Routh continues, “and that gives him an opportunity to figure out this whole hero business — what it is to be a hero, and if he’s a hero without the suit. All [of that] comes into play very heavily in the next three episodes.” 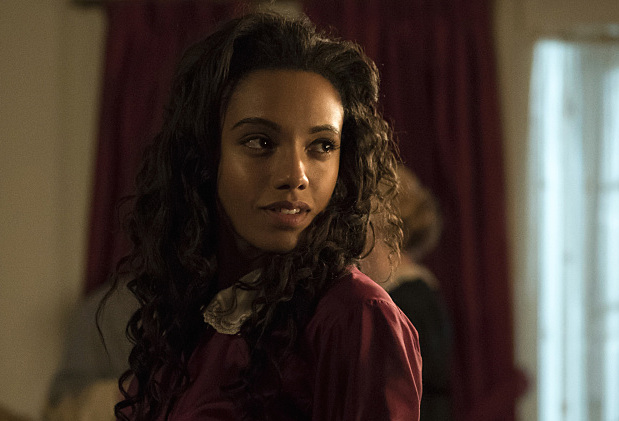 As Ray sorts through his “performance issues,” the Legends this week chase after an aberration in 1863, landing them in the Civil War. Only in this scenario, there be zombies amidst the Confederate army.

Even so, the nature of the historical conflict presents an extra layer of drama for Jax and JSA member Amaya aka Vixen.

“This [episode]’s quite an interesting one,” says new Legends addition Maisie Richardson-Sellers, “because it’s dealing with quite a delicate subject matter – slavery — alongside the slightly comical subject of zombies. But I think we’ve done it in a very sensitive way.

“For Amaya and Jax to experience slavery firsthand, they get into some pretty sticky situations,” the English actress previews. “That brings them closer, and it sort of opens her eyes to a world that she never really knew about, which is her heritage. For those two especially, it’s quite an emotional episode.”

“Obviously, if they bite you, you turn into one, so there’s a team member who perhaps gets a little bit caught up in that,” Richardson-Sellers shares with a laugh. (With reporting by Vlada Gelman)